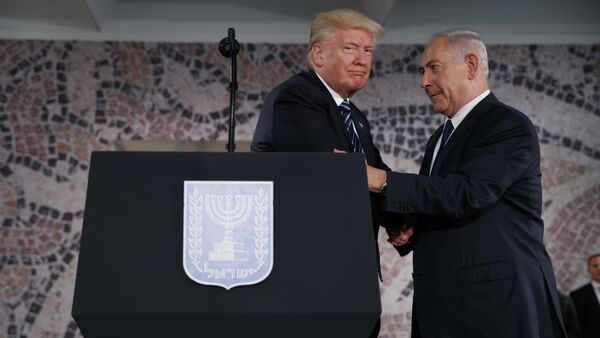 © AP Photo / Ariel Schalit
Subscribe
Earlier this month, Fox News cited two US officials as saying that the Trump administration had finalised the Mideast peace plan, dubbed the “Deal of the Century”.

Israeli Education Minister Naftali Bennett claimed on Sunday that Prime Minister Benjamin Netanyahu and US President Donald Trump were planning to establish a Palestinian state in the West Bank and divide Jerusalem “a day or two after election day” on 9 April.

“Netanyahu and President Trump have agreed to come out with the plan to establish a Palestinian state on 90 percent [of the West Bank]. They’ve agreed not to present the plan before election day so that it doesn’t hurt Netanyahu, but a day or two after election day the plan will be presented, and will include the division of Jerusalem”, Bennett, who heads the New Right party, said at a cabinet meeting.

In order to implement such a peace plan, Netanyahu would turn to the centrist Blue and White party of Benny Gantz in hopes to form a national unity coalition, Bennett went on to say.

“[Blue and White no. 2 Yair] Lapid and Gantz will join [the Likud-led government] and establish a ‘national peace government’”, he said, adding that the only way to stop that is a “strong and authentic New Right”.

Netanyahu was quick to react to the claims, dismissing them as “unfounded”:

“It’s natural that he is stressed and he’s a bit confused. It’s obvious that small parties do all sorts of strange things during the election, including saying things that are unfounded”.

In a statement, Netanyahu’s Likud party labelled Bennett’s warning “utter piffle with no connection to reality”.

“After the elections, Netanyahu will establish a right-wing government under his leadership”.

The development comes nearly two weeks after Fox News cited unnamed US officials as saying that the administration has finished the peace plan, and Trump has been briefed on its contents.

This statement received further confirmation earlier this month when Trump’s senior Middle East adviser and son-in-law, Jared Kushner, said that the administration would publish the plan after the elections.

The Palestinian Authority rejected an earlier attempt by the United States to single-handedly negotiate a peace deal with Israel in wake of Trump’s decision to recognise Jerusalem as Israel’s capital and move the US Embassy to the city.

000000
Popular comments
Mr. President do you work for America or the Jewish lobby in Washington. Your so called peace plan with bed fellow Israel's Netanyahu and moving the embassy are not in Americans best interest and will lead to further regional conflict. Shame on you.

2007harleydavidsonsg
24 February 2019, 15:59 GMT4
000000
2007HarleyDavidsonUSA, Only Americans don't seem to know who their president works for. Here is a hint and you tell me who said it during last elections in USrael: 1. "I love jews, i even have one in ma family" 2. "Of course I love jews, my son in law is jewish" Now, they are both orthodox, father of one, had been sentenced by court. I'm sorry America, you've been sold to Israel very long time ago, but you don't know it yet (or do you?).