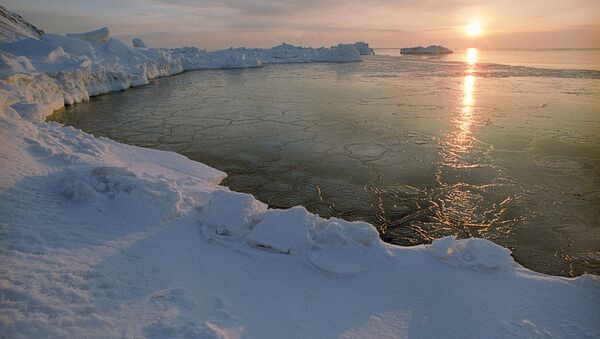 UK Defence Secretary Gavin Williamson announced on 17 February the increase in the country's military presence in the Arctic to counter Russia's activities in the region.

Radio Sputnik has discussed the UK's plan to increase its military presence in the Arctic with David William Norris, a political commentator, writer, and retired lecturer on modern languages at a college in Birmingham, England.

Sputnik: What is your assessment of Gavin Williamson's defence policies in regard to Russia and China now then?

World
'Nobody’s Lake': US Admiral Warns of Russia's, China's Activities in Arctic
David William Norris: Oh, dear, oh, dear! Well, I think we cannot separate his policies from the person himself. I mean, I really don't know what to say about the man. His language at times is juvenile, you know. And I think Mr Lavrov took quite well: "[Gavin] lacks breeding perhaps, lacks education". But it is shameful really because he is not doing any good to our country. And the language that he chooses to use is better used in a school playground. It is not very good at all. And as for what he said on Friday the 15th [February], some of the things are completely unrealistic and outrageous, to be honest.

I mean his quote from Churchill to lend it perhaps some kind of authority doesn't detract from the essential nonsense that he was speaking. To say that "the Navy should develop a reign of terror", he says, but he failed to continue the quotation, which goes on to say: "butcher-and-bolt policy of commandoes behind enemy lines leaving a trail of corpses behind". His show of force really is empty rhetoric because we know the government has cut the budget by 9 billion since 2010. And he is really just touting for money from the treasury, I think. I can't see it as any more than that.

READ MORE: ‘UK Anxiety to Have Arrangements In Place to Handle With Security' — Law Expert

The assertions that he was making about Russia, he offers again no evidence whatever. "Russia is planning to kill thousands and thousands of Britons", that's outrageous — an outrageous statement to make without any kind of evidence.

"Russia is spying on our critical infrastructure. Its connection to continental power supplies, they are photographing power stations", no evidence again, any more than it was for Skripal. No evidence at all.

UK Announces Arctic Military Buildup to Counter Russia's Activities - Reports
Now let's assume that this is going on, well in a way you can't blame the Russians because the aggressive stance of our government and the bullies in the West. They need to be ready, they need to be prepared. They don't want to be caught on the back foot. But I find these comments unbelievable and outrageous. And it is linked to the current so-called Russophobia and it just seems to be growing.

It reminds me very much of what I have read about the time leading up to the Crimean War that up until the middle of the 19th century, we for 300 years have been consistently on friendly relations with Russia. A lot of trade: wood, wheat, and so on. Then as the Ottoman Empire fell apart, there was a tremendous time of upheaval that showed itself in a struggle for influence in trade and so on.

World
Russia Wants to Understand What Mandate NATO Seeking in Arctic
So I think that is true today and I think that is what we are talking about in the Arctic. In the Arctic, [there] is a very rich area. I think it has 30 percent of the world's remaining natural gas, 20 percent — liquefied natural gas, and 50 percent of its oil. So, it is interesting and I think that Britain would just as much like to get the hands on it as Russia. So I don't think very much of Mr Williamson nor his policies.

And as far as China goes, he has made a very foolish mistake in threatening to send ships into the South Pacific, when at the same time Philip Hammond was off to make a trade deal.

Sputnik: Well, I will just interject. I think we were all scratching our heads when he was first announced as the Secretary of Defence and he didn't get off to a very good start when he made that announcement with regard to Russia and, as you have said, Sergei Lavrov just made small shrift of it, and he continues. The question that we need to understand is who is authorising him to say all these statements with stupidity? It is almost he has been given a license to say things with impunity. I mean I don't understand any of his language and he just seems to be a laughing stock. I mean I am no great intellect but I imagine that majority of the people in the UK are saying: "who is this guy making all these particular threats and what have you?"

But at the end of the day, the government and the prime minister must be authorising him to actually make these statements and obviously, this defence policy, strategy of financing this new aircraft and sending these marines to this particular strategic geographical area and in countenance and the opposition and to cause umbrage between Russia. I just can't make head nor tail of it. And the UK and the UK government is obviously have got a policy that is totally in line and in bed with the US in terms of, just wanted to continue, what I call, I am seeing the industrial military complex and all the elitists, and everything is all linked to it.

But unlike you, I am just can't make head nor tail of it and I am just wondering why this person who just doesn't seem to have any emotional intelligence, any common sense logic, be allowed to say these strategic statements. Have you got anything to add to that?

David William Norris: Yes. I think there is a certain line and a certain agreement but there is also an element of anarchy. I mean why was there no connection between Philip Hammond and Williamson in relation to China? So, everybody seems to be doing their own thing in some ways.