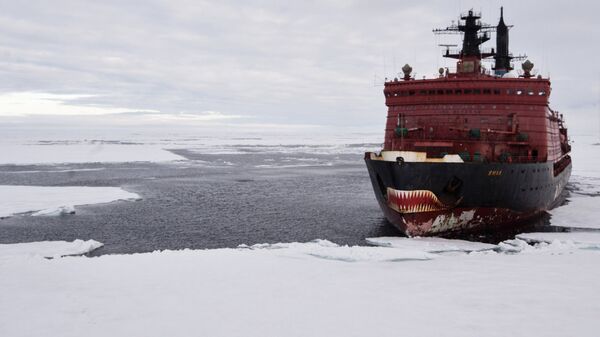 Amid talks about the Arctic waters not being the possession of any specific country, the region has attracted quite a few controversies, with the US and Britain increasingly talking about Russia, which is part of the Arctic Council together with seven other nations, and China boosting their activities there. Russia has repeatedly denied the claims.

The commander of US Naval Forces Europe and Africa and Joint Forces Command Naples, Adm. James Foggo has shared his stance on the area and the developments there in an interview with The Washington Examiner and other outlets.

“It’s nobody's lake”, Adm. James Foggo noted, adding further: “It should have free and fair access to, certainly, all the Arctic Council nations — of which we are a member”.

He then dwelled on China's interest in the region:

“They want to make sure that they have an opportunity to go over the North Pole and bring their merchant traffic”. He went on to say that in the meantime, most US vessels are too large to sail in the largely shallow waters of what he referred to as a “Polar Silk Road”, whereas the Chinese have a whole fleet of multi-sized vessels, including some that are capable of propelling through the Arctic waters. “[S]o they want to make sure that they have a stake up there”, Foggo summed up.

Meanwhile, China is not part of the Arctic Council, despite having obtained “observer” status in 2013, but the second biggest economy is still greatly determined to use a northern shipping lane that is opening as glaciers melt for economic purposes.

Deputy Chairman of the Russian Federation Council's (upper house of parliament) Committee for Foreign Affairs Andrey Klimov commented on Foggo's interview Friday, telling Russian media that the country is ready to defend its interests in the Arctic, despite US' aspirations to control the region.

The US and Iceland have meanwhile been expressing concern over China’s and Russia’s activity in the Arctic, with US Secretary of State Mike Pompeo stating that if America is not engaged, “if we pull back”, other “folks will fill the vacuum”.

In November 2018, US Marine Corps General and Chairman of the Joint Chiefs of Staff Joseph Dunford claimed that Russia is expanding its military presence in the Arctic, and that the US does not rule out this region becoming a conflict zone in the future. Moscow has consistently denied these claims.

China, in the meantime, is planning to cooperate with other countries in the Arctic in an effort to create marine trade routes in the area within its "Ice Silk Road" initiative in line with the landmark "One Belt One Road" plan from 2013, the first White Book on China's policy in the Arctic, issued by China's State Council says.

According to Adm. Nikolai Evmenov, commander of the Russian Northern Fleet, non-Arctic countries are seeking to establish control over the resources in the Arctic region. Earlier this week, for instance,  UK Defence Secretary Gavin Williamson announced an increase in the country's military personnel presence in the Arctic, adding that they will stay vigilant and their new P8 Poseidon maritime patrol aircraft will be used to constraint Russia's activities in the region. It is noteworthy that the UK is not a member of the Arctic Council.

Separately, Russian Defence Minister Sergei Shoigu recently asserted the United States intends to expand its naval presence in the Arctic, with Russian Foreign Minister Sergei Lavrov stressing last week Moscow had taken note of NATO’s interest in the region and would like to know what special mandate the alliance is seeking to get with regard to this. "We don’t believe that the Arctic cooperation requires any military dimension, and I hope this will be the case with our partners as well", he said.

Meanwhile, Russia has proposed an array of projects at the Arctic Council, an intergovernmental forum for eight Arctic States to join efforts in dealing with issues like protecting indigenous communities, sustainable development, and environmental protection.

Moscow has underscored multiple times that it views the Arctic as an area, where the council member states (Canada, Denmark, Finland, Iceland, Norway, Russia, Sweden, and the United States) should strive for constructive dialogue and equal, conflict-free cooperation in the interests of all countries.