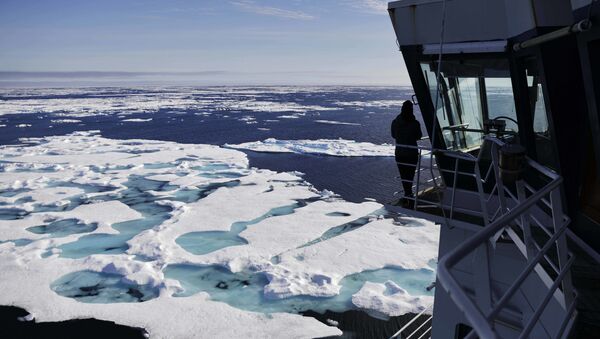 MUNICH (Sputnik) - Russia notes NATO military build-up in the Arctic and wants to figure out what mandate the alliance is seeking to get in the region, Russian Foreign Minister Sergei Lavrov said on Saturday.

"We note the increased activities by NATO members. We discussed this with our Norwegian neighbours. We want to understand what kind of mandate NATO is going to have in the Arctic", Lavrov said at the Munich Security Conference.

He added that the rhetoric of some Western officials created an impression that "nobody except NATO has the right to be anywhere except their own borders."

"If you listen to some people like the minister of war, oh sorry, minister of defence of the United Kingdom, [Gavin Williamson], then you might get an impression that nobody except NATO has the right to be anywhere except their own borders", Lavrov stressed.

Science & Tech
Russia to Launch First-Ever Arctic Weather Satellite - Source
Russia, meanwhile, has proposed many constructive projects in the Arctic Council — an intergovernmental forum for Arctic states — and other relevant structures on cooperation in the region, according to the minister.

"We don’t believe that the Arctic cooperation requires any military dimension, and I hope this will be the case with our partners as well", he added.

The UK defence secretary has repeatedly expressed concerns over Russia's alleged increasing military presence Arctic region and attempts to militarise it. London also earlier voiced fears that navigation in the Arctic could be limited as a result.

In August, Russian Ambassador at Large and Senior Arctic Official Vladimir Barbin pointed to NATO's ongoing military build-up in the region, citing its Trident Juncture 18 drills, the alliance’s decision to set up the new Joint Force Command for the Atlantic based in the US city of Norfolk which would be in charge of the Arctic-Atlantic zone and Washington’s efforts to re-establish its Second Fleet, mainly operating in Northern Atlantic.