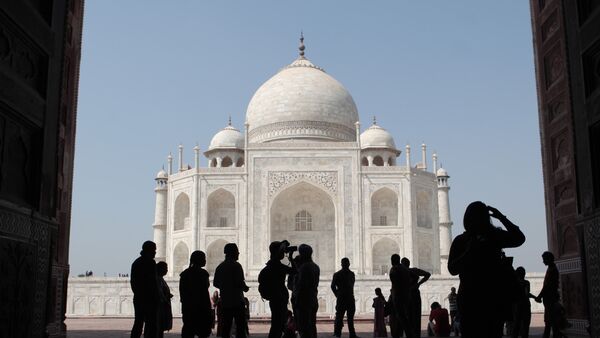 © Sputnik / Sergey Mamontov
/
Go to the photo bank
Subscribe
Spread across seven acres of land near the Yamuna River in the Indian capital, the theme park showcases fine replicas of the Taj Mahal, Eiffel Tower, Statue of Liberty, Great Pyramid of Giza, Leaning Tower of Pisa, Christ the Redeemer, and Rome’s Colosseum, all made of scraps and waste products.

It took tonnes of scrap and only 180 days for five fine-art students to put together the "Seven Wonders of the World" park near the banks of the Yamuna River in New Delhi that was inaugurated on Friday by the Union Home Minister Rajnath Singh.

It’s a unique initiative by SDMC. Wonders of the world are re-created using waste material, promoting both CLEANLINESS & RECYCLING. I congratulate @SDMC_Official for the initiative #WasteToWonder pic.twitter.com/3K71Nf7weZ

The students along with a handful of welders, painters, and helpers created the exquisite replicas of the Seven Wonders of the World that awed visitors from the first go.

"The seven replicas have been made with the scrap of automobile parts and other metal waste like fans, rods, iron sheets, nut- bolts, bicycle and bike parts, defunct sewer lines and age old appliances gathering dust in the 24 Municipal Stores. In all 150 tonnes of scrap/waste has been used", Rajnath Singh, India's Minister of Home Affairs said while inaugurating the park.

"Before this, we had only made normal sculptures and this was a big test for us. We had to match minute details of the real architecture which we were replicating. No such work was done before, so we had no template", Pijush Kanti Patra was quoted by the Hindustan Times.