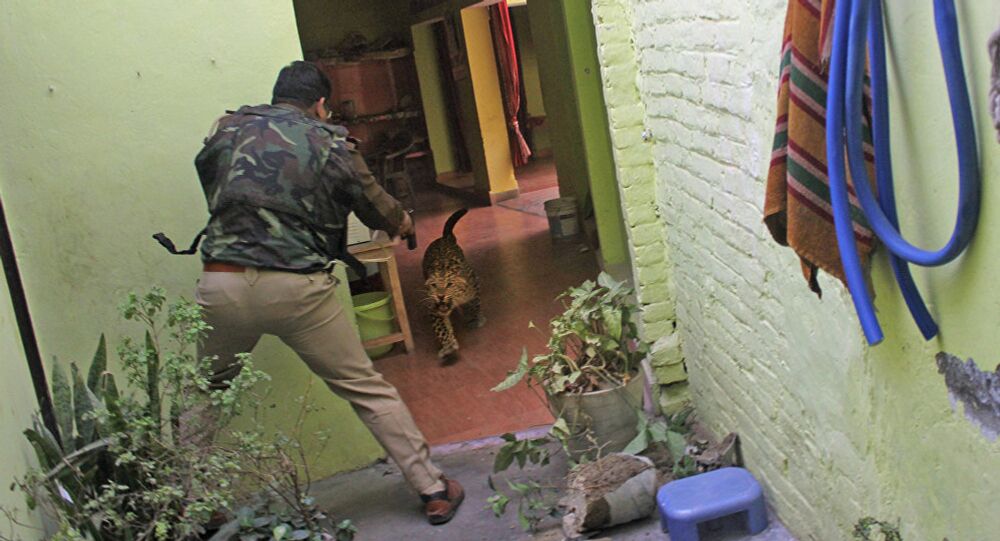 The Andrei Stenin International Photo Contest is an annual competition for young photojournalists aged between 18 and 33, and serves as a Russian platform for exciting new talent, allowing them to make a name for themselves on the world stage.

New Delhi (Sputnik) — After receiving accolades for his winning entry in Moscow, Sputnik spoke with Ajay Kumar, an Indian press photographer who grabbed third place in the ‘Top News Single Image' category, on his aspiration and views on photojournalism. Kumar's submission was a photograph that captured animated details of a cop shooting a leopard which had wandered into a residential area at point-blank range.

The first ever exhibition of the selected entries of the 4th Andrei Stenin Photo Contest is scheduled to open in New Delhi on 22 February 2019.

​Sputnik: Did your success in the competition surprise you? How did you react upon discovering you achieved third place?

Ajay Kumar: It was surprising to some extent. I always believed that the entry which I sent was one of the best one but I had no clue about the kind of entries that had come from the all over the world. So the announcement that my photograph was amongst the winning entries was a welcome surprise. I have always tried to do the best in every assignment that I was given.

This award has further strengthened me for challenges ahead because we all know that photojournalism in these times is a tough job laden with troubles and legal hurdles.

Sputnik: How important do you think it is for young photographers to be recognised for their work, especially through a prestigious platform like the Andrei Stenin Photo Contest?

© Sputnik /
Reporters From Bhutan, Yemen and Sudan Apply for Stenin Contest for the First Time
Ajay Kumar:  It makes you feel that your work is worth something and that it is being noticed all over the world. The experience of going through the whole process of Stenin Photo Contest and the lessons thereby accrued has helped me benchmark my work with my global peers.

The three-day meeting of the winners in Moscow was an opportunity to exchange global practices in photojournalism. Every photographer who was with us to receive the award had a challenging story to share. The experience was an inspiration to keep going even in tough times.

Sputnik: Can you share something about your past, your training and your fellow family members?

Ajay Kumar: I come from a family of farmers. My father is still an agricultural worker and my mother takes care of the family. I did my masters in journalism. Photography was not a major focus of the course but with help of a teacher I took time out to pursue my interest in photography on my own.

My mother spent all her savings and valuables to buy me my first camera which I still use.

She still does not much know what photography is all about but she was supportive of the passion of her son. I think while I won this award, I should dedicate it to my mother who encouraged me to go ahead and pursue my interest.

© Sputnik /
Andrei Stenin Contest African Tour Continues in Johannesburg
Sputnik: Tell us more about the photograph which won you this award. Also, tell us about the work of other fellow contestants, how do you rate them and did you glean any lessons from them?

Ajay Kumar: There was information received from a source that a leopard had entered into a residential area on the outskirts of Lucknow city and the police and the forest department had laid a trap to catch it to protect the area's inhabitants. I rushed to the spot and reached the area not knowing that the leopard was in close vicinity. All of a sudden I saw the leopard rushing out of a house and a policeman aiming at it. I was clueless for a while because there were no attempts to catch it alive. The mute animal was killed point-blank. The moment was captured by my camera and the responsible officers were suspended.

I have seen the works of other contestants. They are worth the accolades they have won. I will certainly try to incorporate the lessons from them in my work in the future.

Sputnik: How do you see photojournalism growing in India? What are some of the challenges faced by news photographers in India?

Ajay Kumar: Journalism in India is as vibrant as ever. Photojournalism is catching up and there are many youngsters who are taking up the art of capturing moments while risking themselves. With the advent of new media, speed is an important factor and technology has a greater role to play in the work. Training with new gadgets and equipment today is as important as innate skills and passion. I think Indian media is still learning and there is a need to catch up with technological changes.