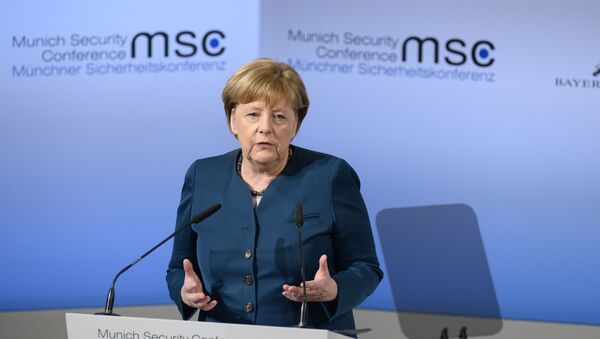 German Chancellor Angela Merkel advocated preserving the Iranian nuclear treaty and multilateralism, while US Vice President Mike Pence rolled out demands to European allies, including a demand to pull out of the 2015 JCPOA and ditch Russian gas.

Merkel's speech clashed dramatically with Pence's during the Munich Security Conference on Saturday.

In an "uncharacteristically passionate speech," Merkel condemned the recent unilateral moves made by the United States — without naming the nation — The New York Times report reads.

"We sit there in the middle with the result," she said, according to the New York Times.

"We imported large amounts of Russian gas [during the Cold War]," she said. "I don't know why times should be so much worse today."

"Do we want to make Russia only dependent on China? Is that our European interest?" she asked, adding, "I don't think so."

In contrast, Pence, who spoke immediately after, demanded that the EU abandon the 2015 Joint Cooperative Plan of Action (JCPOA) nuclear deal, as the US did, as well as rolling out a number of other demands on European allies.

"The time has come for the Europeans to leave the Iranian nuclear deal," Pence declared, adding, "the Iranian regime openly advocates another holocaust, and it seeks the means to achieve it."

Pence reiterated the Trump demands that EU and NATO members increase military spending, while praising the US president for "showing renewed American leadership in the world" in his belligerence toward China and North Korea.

Merkel, however, said that the EU is committed to preservation of the JCPOA, arguing that preserving the treaty is a more effective tool to alter Iranian policies.

"Do we help our common cause, our common aim of containing the damaging or difficult development of Iran, by withdrawing from the one remaining agreement?" she stated.

"Or do we help it more by keeping the small anchor we have in order maybe to exert pressure in other areas?"

"The two speeches were a reminder of how far apart Europe and the United States are on a range of global issues," the newspaper wrote.

Observers were "struck" with the difference in tone and the reception of the two speeches, the New York Times reports.

"In contrast to Merkel's visionary outward-looking speech that triggered warm applause, Mr. Pence delivered a stilted defense of Trump's achievements to a sceptical audience," noted Amanda Sloat, a scholar with the Brookings Institution in Washington DC and a former Obama administration official.