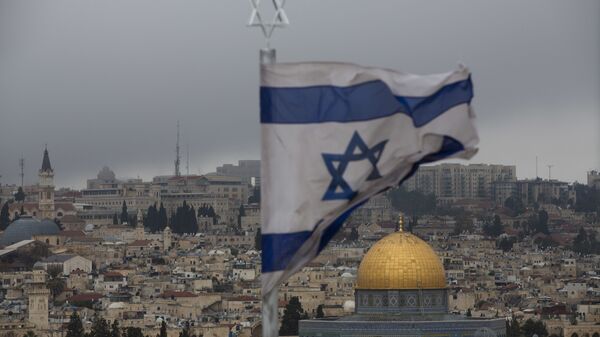 During a key conference on the Middle East in Poland, US Vice President Mike Pence called Iran “the greatest threat to peace and security” in the region.

Speaking at a conference of European and Middle Eastern countries in Poland, US Vice President Mike Pence claimed that Iran was plotting to “erase Israel from the map”, and sought to unleash “another Holocaust”.

“The authoritarian regime in Tehran… openly advocates the destruction of the State of Israel. The Ayatollah Khamenei himself has said, ‘It is the mission of the Islamic Republic of Iran to erase Israel from the map’. […] Beyond its hateful rhetoric, the Iranian regime openly advocates another Holocaust and it seeks the means to achieve it”, Pence said.

Reflecting on the US decision to withdraw from the 2015 Iran nuclear deal, Pence blasted a new mechanism by France, Germany, and the UK to allow European businesses keep operating in the Islamic Republic in the face of US sanctions.

“It’s an ill-advised step that will only strengthen Iran, weaken the EU, and create still more distance between Europe and the United States. […] The time has come for our European partners to withdraw from the Iran nuclear deal and join us as we bring the economic and diplomatic pressure necessary to give the Iranian people, the region, and the world the peace, security and freedom they deserve”.

As Iran celebrated the 40th anniversary of the Islamic Revolution on 11 February, Pence vowed to exercise maximum pressure on the country.

“Forty years ago this month, the mullahs seized control of that country. [….] Today, America’s economic sanctions on Iran are the toughest in history and will get tougher still unless and until Iran changes its dangerous and destabilising behaviour”.

Israeli PM’s Office Deletes Tweet Citing ‘Interest in War With Iran’
Pence’s speech came on the heels of remarks by US Secretary of State Mike Pompeo, who told reporters that “confronting Iran” is a necessary step for any nation that wants to “achieve peace and stability” in the Middle East.

Earlier this week, Israeli Prime Minister Benjamin Netanyahu dove into the limelight over accidentally mentioning a “common interest of war with Iran” that Israel and a number of Arab nations could potentially share.

Whether the remark was mistranslated from Hebrew or not, the PM’s Office Twitter account was quick to replace the “war” part by simply “combating Iran”.

.@IsraeliPM deleted their tweet and replaced “war with Iran” with “combating Iran” pic.twitter.com/26vMOHGwkj

The conference on the Middle East comes amid tumultuous relations between Iran and Israel, with Tel Aviv concerned over Tehran’s alleged attempts to expand its clout in the region and establish a permanent military presence in Syria.

Tensions between the two countries reached their climax when the Israeli Defence Forces started conducting airstrikes on what they claimed were Iranian military targets in Syria. Tehran, which has consistently stressed that it has only been providing military advisers to Damascus, said that “if Israel takes any action to wage a war against us, it will definitely lead to its own elimination and freeing of occupied territories”.

“Iran’s strategy is to remove the Zionist regime from the political map, and the Israelis contribute to this by their criminal activities”, said IRGC second-in-command Brig. Gen. Hossein Salami.

In a parallel development, tensions between the US and Iran have exacerbated since President Donald Trump, who proved to be a strong supporter of Israel, chose to leave the Joint Comprehensive Plan of Action, commonly referred to as the Iran nuclear deal, last May.

'Netanyahu's Illusions': Zarif Slams Israel Over Deleted 'War Against Iran' Post
Describing it as a “terrible” and “one-sided” agreement, he subsequently announced the decision to re-impose sanctions on Tehran, thus subjecting other countries, including signatories to the deal – Russia, France, the UK, China, Germany, and the EU – to secondary restrictions.

Since the aforementioned nations decided to preserve the agreement, European countries have worked out a worked out a mechanism, called a “Special Purpose Vehicle”, that would allow its companies to keep operating in Iran, bypassing US sanctions.