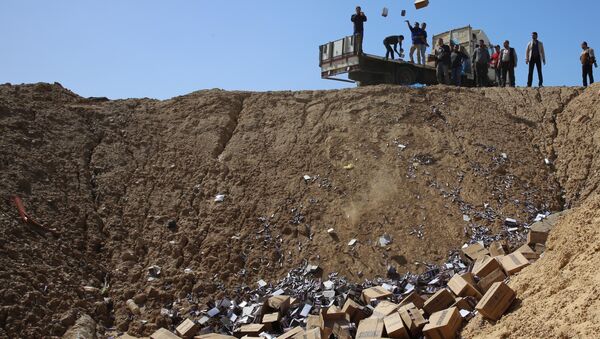 © AP Photo / Adel Hana
Subscribe
Tens of thousands of US military members who served in Iraq and Afghanistan have been exposed to burn pits, open-air military sites where waste generated by war is combusted.

Joe Hickman, journalist and author of "The Burn Pits: The Poisoning of America's Soldiers," and Kathy Kelly, the co-coordinator of Voices for Creative Nonviolence, joined Radio Sputnik's Loud & Clear Wednesday to discuss how toxic substances from burn pits have resulted in ailments that are often times overlooked.

​"They [US commanders] started using them [burn pits] right at the get-go from the war in Afghanistan and Iraq," Hickman told hosts John Kiriakou and Brian Becker.

"They used them much earlier; they used them in Vietnam. What happens, and what most people don't realize, is how much trash war creates and how much of a big problem it is for the commanders on ground. Anything from the rubble, from the bombardments… [the trash] averages around nine pounds of trash per day. So, when you have thousands of troops on the ground, trash has to build up very fast, and the commanders have to figure out what to do with it," Hickman added.

"So, they decided to create open air burn pits where they throw all of this stuff in a makeshift dump and light it on fire and burn it. And the problem with that is, they burn anything and everything in these burn pits. They burn tires, wood that was treated, plastc, styrofoam, human body parts. The soldiers' housing quarters [are] sometimes within 300 meters from these massive burn pits," Hickman added.

According to Department of Veterans Affairs spokesperson Curt Cashour, the department processed 11,581 disability compensation claims between June 2007 and November 20, 2018, with at least one condition tied to burn pit exposure, the New York Times reported. However, out of the 2,318 claims that were granted, 44 percent of the claims related to burn pits were denied because exposure to such conditions has not been officially diagnosed, while around 54 percent were denied "due to a lack of evidence establishing a connection to military service," Cashour added.

In addition to military troops, people living in war-torn areas are also affected by these pits, according to Kelly.

"Immediately across from one of the largest US spaces in Kabul, Afghanistan, is a sprawling refugee camp, and in the refugee camp, people have been displaced by wars and drugs. And so they come to these camps, and they have no income. And so people displaced [are] already [affected] by horrible air because of multiple causes of pollution, including what Joe is describing as the the burn pits in Afghanistan. They then can't possibly afford to buy wood. They have to find some source for warmth. And so they start to burn tires and plastic bags, whatever substance they can find that is cheaper or that they can accumulate without any charge, and the air gets worse and worse," Kelly told Sputnik.

"Surely, we must recognize the effect of war on global warming and climate change," she added.

"It's horrible. In Kabul, cancer rates are up 20 times higher than before we went to war there. They are seeing birth defects now that are so hideous they don't have any names for them. In Iraq, cancer rates are up up by over 100 percent. So, it has to be from the effects of the war. A lot of people will blame it on depleted uranium, which I'm sure it has something to do with. What has been really overlooked is [the effect of] open air burn pits," Hickman responded.

According to a report by the New York Times, both the House and Senate Committees on Veterans' Affairs are planning to look into the Department of Veterans Affairs' list of service-connected illnesses that allow for disability compensation.

"It is a top priority to make sure veterans who have service-connected diseases have the care and benefits they are owed," Senator Johnny Isakson, Republican of Georgia and the chairman of the Senate Committee on Veterans' Affairs, told the outlet.