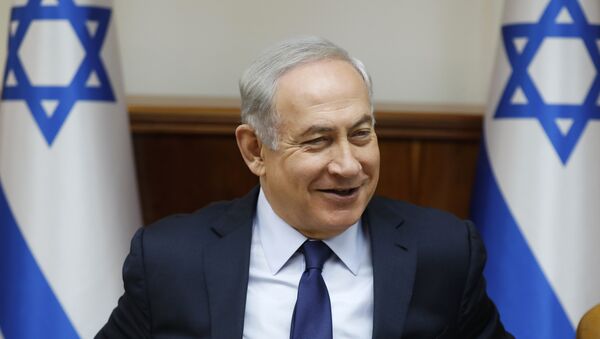 Venezuela's opposition leader Juan Guaido, who earlier proclaimed himself president despite not being elected as such by Venezuelans, has announced that he is working to restore his country's ties with Israel.

Caracas broke off diplomatic relations with Tel Aviv under former Venezuelan President Hugo Chavez, in protest against Israel's military campaign against Palestinians in the Gaza Strip in the winter of 2008-2009.

"I am very happy to report that the process of stabilising relations with Israel is at its height, something that is very important for us," Guaido told the Israel Hayom daily.

He pledged that a formal announcement on re-establishing bilateral ties and opening a new Venezuelan embassy in Israel would come "at the proper time".

"First and foremost, we want to resume [Venezuelan-Israeli] relations and then we will inform you about the appointment of the [Venezuelan] Ambassador to Israel, and we do hope that an  ambassador will come to us from the Jewish state," Guaido added.

The statement came after Israeli Prime Minister Benjamin Netanyahu stated on 27 January that "Israel joins the United States, Canada, most of the countries of Latin America and countries in Europe in recognising the new leadership in Venezuela".

'I Don’t See Guaido Taking Over, I See a Civil War' – Geneva Law Professor
The political crisis in the Latin American country escalated on 23 January when the opposition-controlled National Assembly declared that President Nicolas Maduro had usurped power in Venezuela.

Shortly after, the assembly's speaker, Juan Guaido, proclaimed himself interim president, while Maduro called Guaido a US "puppet" and accused Washington, which has stated that it has all options on the table with regard to a response to the crisis, of organising a coup.

Russia, China and a spate of other countries stated that they recognise Maduro as Venezuela's only legitimate president, as he was democratically elected.