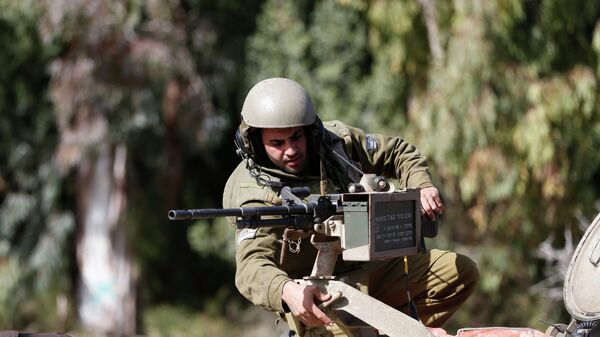 BEIRUT (Sputnik) - A new conflict could erupt between Israel and Lebanon as a result of the United States' actions aimed at sowing discord in the region as well as Washington's campaign against Tehran and the Lebanese Hezbollah movement, Russian Ambassador to Lebanon Alexander Zasypkin said in an interview with Sputnik.

"As for a conflict between Israel and Lebanon, nothing can be predicted with certainty because the region is at a crossroads. Peoples are demanding the settlement of existing crises, the return to a peaceful life, the development of cooperation. A negative alternative to this is the incitement of new conflicts by the Americans, which could involve many countries as well as ethnic and religious forces", the diplomat said.

Zasypkin stressed that instead of trying to deal with tensions in the region together with Russia and other countries, the United States has launched a campaign against Iran and Hezbollah, making the situation the region even more volatile.

Russian Ambassador to Lebanon Alexander Zasypkin stated in an interview with Sputnik that Lebanon's Hezbollah movement has played an important role in crushing terrorists in Syria, siding with the Syrian government and its allies.

"When events started unfolding in Syria, Hezbollah sided with its lawful authorities, seeing the fight against terrorists in the region as its duty. Hezbollah became directly involved in military operations at Syria’s request, alongside Russia and Iran. The party took a responsible approach to what was happening in Syria and the region as a whole and contributed significantly to terrorists’ defeat", he said.

Zasypkin called the Shiite movement a powerful political party that is actively involved in the work of Lebanon’s parliament and government in support of stability, security, interfaith peace, and national dialogue.

"After the formation of a new government, the party’s secretary general, Hassan Nasrallah, notably urged political forces to refrain from fighting among themselves and to take on massive challenges the country faces", the diplomat pointed out.

Hezbollah sent three ministers to the new Lebanese cabinet that took over last month. The United States, which considers Hezbollah a terrorist group, has warned the party against funneling government money to its military wing. In response, Nasrallah has promised to use party money for the public’s sake if needed.

Lebanon’s New Government Says It Will Stay Out of Syria
The Israeli armed forces started operation Northern Shield, aimed at uncovering Hezbollah attack tunnels that had been dug into Israeli territory in early December 2018. Later that month, the IDF stated that the Israeli military had located a total of four tunnels. Their existence was confirmed by the United Nations Interim Force In Lebanon (UNIFIL). At the end of December, media reported that a fifth such tunnel had been destroyed by Israel.

The Israeli authorities believe that Hezbollah used the facilities to transfer militants and weapons to Israel.