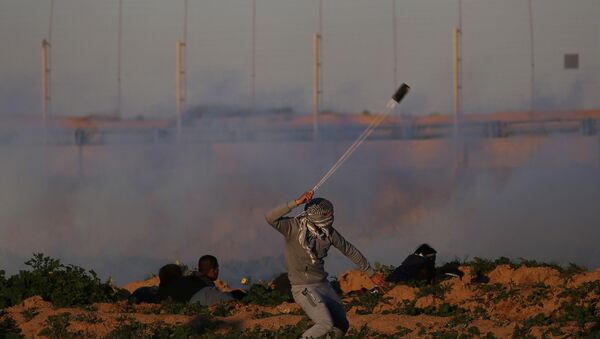 Israel has maintained a blockade on the Gaza Strip since 2007, after Hamas militants took over the enclave and replaced Palestinian Authority officials. The Boycott, Divestment, and Sanctions (BDS) movement was later launched to pressure Israel to end the blockade.

The Roman Catholic parish of San Carlos Borromeo in Madrid has been ordered to cancel the screening of an award-winning documentary on the Gaza Strip due to pressure from the Jewish community.

The film, titled "Gaza, a look into the eyes of barbarism", received the prestigious national Goya award for Best Documentary Short Film. According to the awarding body's website, the film tells a story about "Israeli aggression" in the Gaza Strip and Tel Aviv's "violation of human rights".

Its screening was scheduled for last Friday, but the parish said that the Archdiocese of Madrid told them to cancel the event.

"A vicar called me on behalf of [Archbishop of Madrid] Cardinal [Carlos] Osoro to tell me that the screening of the documentary had to be suspended, and that there had been under a lot of pressure from the Jewish community," Pastor Javier Baeza from San Carlos Borromeo told El País.

He said they were offered to put the film on display from the Boycott, Divestment and Sanctions (BDS) campaign, which seeks to exert economic and cultural pressure on Israel and companies that do business with it in a bid to bring Tel Aviv into compliance with international law, under which much of Palestine is considered illegally occupied.

According to the pastor, his parish was forced to suspend the screening because it would be the second act of disobedience in a short period of time. "The first one was when Willy Toledo gave a press conference here, they called me ten minutes before to suspend it and I answered that it seemed disrespectful," he said, adding that the screening would have implications as serious as the closure of the parish.

Last September, Spanish actor and political activist Guillermo "Willy" Toledo was arrested after ignoring a court summons over a probe into his 2017 Facebook posts, which the prosecution said had offended religious feelings.

San Carlos Borromeo said that the screening was meant to "offer a reflection on the reality of the Gaza Strip" and that such events are common at the centre, which also hosts concerts and presentations.

The Archdiocese of Madrid confirmed that it was Cardinal Osoro who asked for the event to be suspended, but refused to go into further details.

Israel imposed an air, land and sea blockade on the Gaza Strip in 2007 in response to the take-over of the enclave by Hamas, a political organisation and militant group opposed to Israel's existence.

Israeli authorities constructed a barrier along the Gaza border in a bid to prevent Palestinian militants from entering its territory, and Human Rights Watch has repeatedly accused Tel Aviv of restricting Palestinians' right to free movement of people and goods via the blockade.