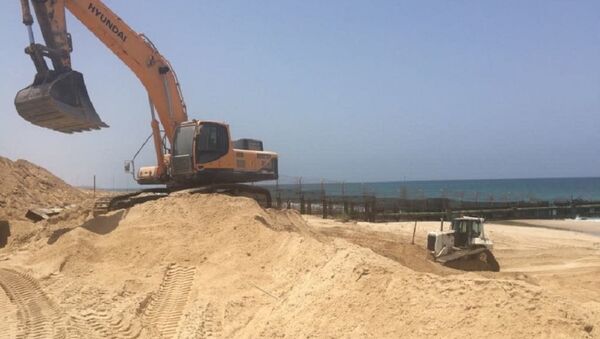 TEL AVIV (Sputnik) - Israel has begun to construct a new "barrier" along the border with the Gaza Strip in order to prevent illegal crossings of Palestinian militants, Israeli Prime Minister Benjamin Netanyahu said on Sunday at a Cabinet meeting.

"Over the weekend we began building the above-ground barrier along the Gaza border. The barrier will prevent terrorists from Gaza from penetrating into our territory on the ground. I would also like to make it clear: if the quiet is not maintained in Gaza, we will make the decisions even in the elections period and will not hesitate to act," Netanyahu said, as quoted in the statement of his press service.

According to the Jerusalem Post, the wall will replace metal mesh fencing that has proved vulnerable to regular breakthroughs. The new wall will be 65 kilometres long, made from galvanised steel and will be around six-metres-high.

Lebanon Lashes Out at Israeli 'Threats' Over Border Wall
Tensions between the Israelis and the Palestinians near the Gaza border have been mounting since late March, which marked the beginning of the Great March of Return. Over 220 Palestinians, including children and media workers, have been killed by Israeli troops since then. The Israeli military says one soldier was killed.

The Israeli-Palestinian conflict has been ongoing for decades and is rooted in the Israeli government refusal to recognize Palestine as an independent state in the territories of the West Bank and the Gaza Strip.

Israel has imposed an over decade-long air, land and sea blockade on the Gaza Strip, justifying the decision by saying it needs to protect its citizens from terrorism.