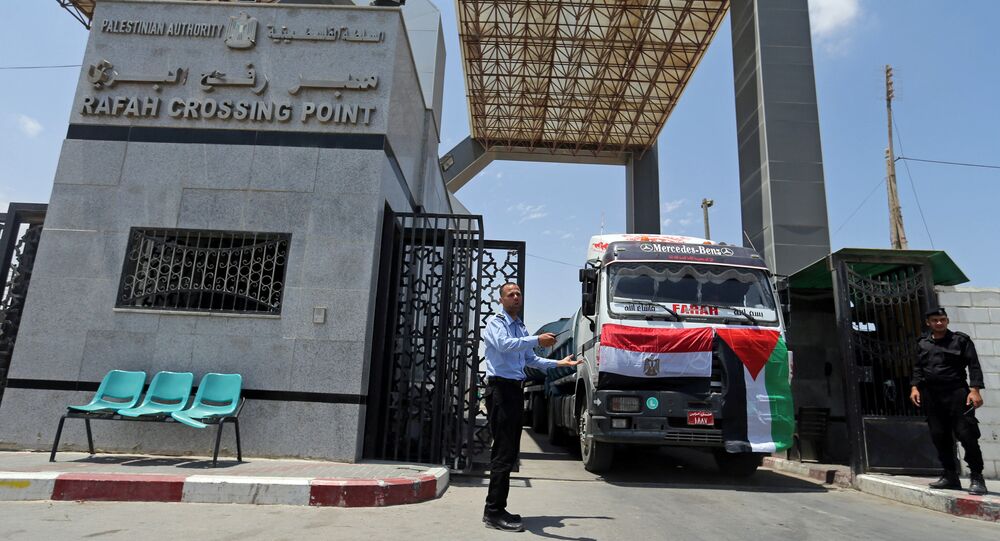 The demission of the Palestinian Authority government on 29 January has triggered criticism from Hamas. Speaking to Radio Sputnik, Palestinian activist Professor Mazin Qumsiyeh and Israeli Professor Meir Litvak opined that the move will deepen the division between Fatah and Hamas, diminishing the chances for reconciliation.

The government's resignation will deepen the division between the West Bank and the Gaza Strip, says Professor Mazin Qumsiyeh, director of the Museum of Natural History at Bethlehem University and a Palestinian activist, commenting on the decision by Palestinian Prime Minister Rami Al-Hamdallah to step down.

On 29 January, the Palestinian prime minister and the national unity government, which was formed in 2014 to reconcile the rival governments in the West Bank and Gaza, resigned.

"The president will begin consultation to form a political government made up by factions of the Palestine Liberation Organisation (PLO) that will prepare for the holding of [a] new parliamentary election", Abbas stated.

Speaking to Radio Sputnik, Qumsiyeh opined that there would be little if any changes in the government's political course with regard to the Fatah-Hamas reconciliation process. According to the academic, the previous unity government "was not allowed to really operate in the sense of having reconciliation, because the reconciliation agreement was not implemented by either Fatah or Hamas".

According to him, the prospects of reconciliation "are becoming smaller by the day", since there is a "very high level of distrust" between Fatah and Hamas.

"There's a lot of bitterness among Fatah against Hamas", Litvak told Radio Sputnik. "Recently Fatah wanted to celebrate its anniversary in Gaza and Hamas didn't allow them to carry out the ceremony and even dispersed them by force".

According to the Israeli expert, Hamas feels pressure inside Gaza because of the bad economic situation in the region and "they are not willing to make any concessions to Fatah by giving up some of the absolute political control over Gaza".

What Will the Next PA Government be Up to?

© AP Photo / Craig Ruttle
Government of Palestinian Authority Resigns - Reports
When asked who may fill the prime minister's position in the PA government, Qumsiyeh suggested that Muhammad Ashtiya is likely to take the helm. "He is a favourite, of course, of the ruling elites", he said, adding that the politician is regarded as the most "rational and reasonable person" by the Palestinian Authority leadership.

It appears that Hamas is not happy with the Hamdallah cabinet's resignation: the organization has condemned the move as an attempt to marginalise the movement and exclude it from Palestinian politics. The Hamas leadership even went so far as to claim that the resignation would lead to the creation of a new "separatist government".

According to Litvak, what the new government is likely to seek is "to reassert their position and hope to increase their legitimacy in the Palestinian population".

"What they are trying to do now is to bring more Fatah activists to the government", the Israeli scholar presumed.

"So, whether or not some ministers in the Palestinian government change, that doesn't bring about any change in the political situation or in the relations between the Palestinians and the Israelis", he underscored.

© AP Photo / Hussein Malla
'It Was a Surprise It Took Israel So Long to Discover Them' - Hezbollah Leader on Tunnels in Lebanon
Fatah maintained dominance on the Palestinian political arena until the First Intifada (1987 — 1991). In 1987 Hamas, a Palestinian Sunni militant organization emerged as yet another rival of Israel. While the Oslo Accords of 1993 and 1995 signed by the Palestinian Liberation Organization and Israel denounced armed resistance, Hamas refused to recognise the pacts' provisions.

The Fatah-Hamas spat culminated in the 2007 Battle of Gaza, when the militants managed to take control of the Gaza Strip. As a result, the Palestinian territories were de facto divided between the two entities, although Fatah and Hamas signed the Mecca Agreement in February 2007 and agreed to form a national unity government.