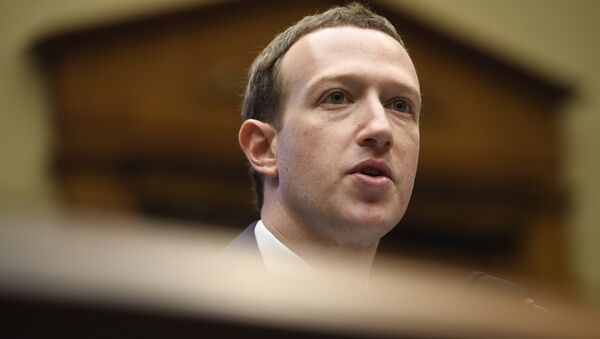 © AFP 2021 / Saul Loeb
Subscribe
The world's most popular and arguably most influential social media platform turns 15 on Monday. What was initially designed as a network for university students has morphed into a huge, deep-pocketed corporation - as well as a powerful means of swaying public opinion.

Mark Zuckerberg was a Harvard University sophomore when he launched Facebook, and he probably hardly expected what his brainchild would become years later. Since 2004, the platform has witnessed rapid growth, both in terms of users and market value, as well as influence, a less tangible asset.

Facebook went on to acquire Instagram and WhatsApp, and its active monthly user count hit the one-billion mark in October 2012, and today sits at some 2.3 billion. Other than its truly global reach, it has also become one of the world's biggest companies, with a market capitalisation of nearly $480 billion (as of the end of January).

Economics and demographics aside, Facebook has exposed the dangers of social networks in an information society. Zuckerberg's pet project has been mired in scandals and controversies, with the biggest one so far being the Cambridge Analytica saga.

Cambridge Analytica is a London-based political consultancy firm that worked on Donald Trump's 2016 presidential campaign. It emerged last year that the company, co-founded by Trump's former chief strategist Steven Bannon and American hedge-fund manager Robert Mercer, had harvested, prior to the 2016 election, the data of up to 87 million users without their permission via a quiz app.

The leaked information was supposedly used to develop the psychological portrait of a large number of voters in a bid to predict and possibly sway public opinion. This case prompted concerns that the data of 2 billion Facebook users could be in jeopardy.

Facebook acknowledged that it learned about the data breach in 2015 and requested the company to delete all unauthorised information. Cambridge Analytica said that it complied with the request, but Facebook latter admitted that the firm had lied.

Mark Zuckerberg testified before US Congress last March, saying that the massive data leak was a "breach of trust", and pledged to fix the problem. He refused to admit, however, that his platform was selling data to third parties.

Facebook also confirmed that the data of 2.7 million EU citizens were among those targeted by Cambridge Analytica — a revelation that led European authorities to suggest that this data breach could have affected public opinion there as well.

The Cambridge Analytica scandal stirred widespread outrage both in the US and overseas, with critics saying that an unregulated Facebook poses a threat to democracy.

"Facebook has totally changed over the past decade with the evolution of the concept of social media," Pierluigi Pagainini, a member of the European Union Agency for Network and Information Security, told Sputnik. "Social networks had become a privileged instrument for intelligence activities, user profiling for commercial purposes, for pry-ops."

"Facebook does not apply any form of direct censorship, but it has not yet been able to prove that it cannot be misused for disinformation campaigns by political parties or by states," German economic historian Alexander von Witzleben said.

"This is dangerous because Facebook has a dominant position and almost monopolistic power, both economically and in the field of social media."

Witzleben argues that to prevent political abuse, Facebook should be put under a similar legal regime as universal service providers, such as postal and telephone services.

Choong-Fook Fong, CEO of cyber security firm LGMS, contends that if Facebook takes up the regulatory role to decide what statements are allowed and what is against their policies, it might as well be "another political party".

He insists that governments shouldn't pass a law to prohibit the publication of political ads. Instead, he believes, "all social media giants shall be banned from performing data analytics on their users' preferences, particularly their political preferences".

His colleague, Kenneth Shak, a senior cyber security consultant, made similar remarks: "Facebook can be viewed as a powerful means to shape the public opinion," he told Sputnik, adding that "much tougher regulations" should be imposed on the company to ensure data security.

Rufo Guerreschi, the executive director at the Trustless Computing Association and leading-edge IT security entrepreneur and activist from Italy, told Sputnik currently, due to owning Whatsapp and Instagram, Facebook together with Twitter, has become of the last few years by far the most powerful institution in forming peoples' priorities, opinions and culture.

"The appalling lack of national and international regulation is allowing powerful unaccountable entities — from its own shareholder and boards to political action committees, from powerful nation states to small activist or criminal hackers groups — to unduly influence and manipulate the public sphere. The goal is not to combat “fake news” or to promote freedom of speech – which is just one right which is limited and to be balanced with others – but make the public sphere much more democratic."

Apart from collecting user data, Facebook has been chastised for perceived undue bias in favour of left-leaning views. Perhaps the most high-profile accuser has been Donald Trump. The POTUS said last August that he was getting "thousands of complaints" about the social media giants' alleged suppression of conservative reporting and prioritisation of left-wing media.

Facebook faces similar accusations in the UK as well. Last April, the platform suspended AggregateIQ, a Canadian data mining firm that had advertised ads for the pro-Brexit Democratic Unionist Party (DUP), as well as for the Vote Leave, BeLeave, and Veterans for Britain campaigns. AggregateIQ, which accounted for 40 per cent of Vote Leave's campaign budget, was reported to have connections with SCL Elections, the parent company of Cambridge Analytica.

UK lawmakers have repeatedly requested Zuckerberg testify over concerns that the data leaked to Cambridge Analytica could be used to sway voter opinion ahead of the 2016 Brexit referendum. The billionaire turned down their invitations, however, and maintained that no UK users' data had been targeted in the initial breach.

Belgian human rights activist Andy Vermaut insists that although both Brexiteers and pro-EU campaigners may have taken advantage of leaked personal data, Brexit is a vivid example of how Facebook stifled conservative voters.

"What is striking is that the emphasis has been placed on the no-camp, which ultimately shows that one wants to put the rather heavy-duty right-wing activists in a bad light.

"Those who have questions about the legitimacy of the European Commission and its austerity policies are also victims of this censorship from my experiences. Anyone threatening the establishment will be more easily victim of internet censorship, under the guise of addressing fake news.

"While the yes camp has applied the same tactics, the emphasis is on the no-camp on the Brexit. This raises questions about the objectivity of the investigations by the European institutions."

000000
Popular comments
"...for perceived undue bias in favour of left-leaning views. ..." It is not perceived, it is proven that Facebook is outrageously slanted against conservative opinion. It's the Socialist Jewish Workers Party online.