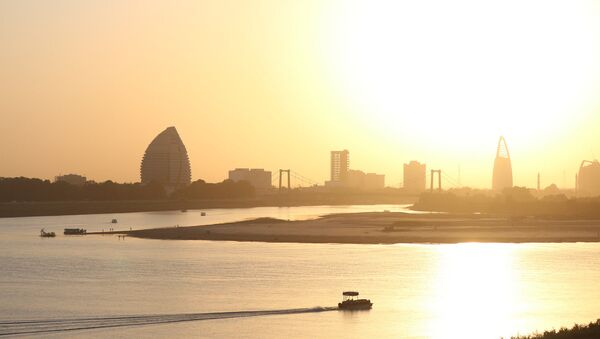 CC BY-SA 2.0 / Juri Knauth / Khartoum
Subscribe
International
India
Africa
KHARTOUM (Sputnik) - The delegation of the government of the Central African Republic (CAR) and representatives of armed opposition openly exchanged views at a meeting during the African Union-brokered negotiations in Khartoum on crisis settlement in the CAR, an informed source told Sputnik.

On Thursday, a new round of peace talks between the CAR government and militant leaders started in Khartoum. As a source in the Sudanese Embassy in Russia told Sputnik, the talks may last for up to 10 days. Andrei Kemarsky, the director of the Russian Foreign Ministry's Department of Africa, arrived in the Sudanese capital on Wednesday to take part in peace talks that are observed by the United Nations, Sudan, Gabon, Chad, Equatorial Guinea, and Congo.

The CAR government sent a delegation of senior ministers to Khartoum, led by the president’s chief of staff, Firmin Ngrebada. Delegates from 14 armed militias are attending the talks, as well as religious leaders, human rights advocates and other civil society figures.

Africa
Russia Pledges Continued Support for Central African Republic Security - Envoy
The source noted that during the meeting between the delegations, all issues were discussed openly and directly.

The CAR has been suffering from sectarian clashes between the Muslims and the Christians since the 2013 coup, when the Muslim Seleka rebels seized control of the nation, overthrowing then-President Francois Bozize and provoking a backlash from the Christian Anti-Balaka militia.

In August 2018, the two groups agreed to establish a platform for consultations on sustainable peace in the CAR. The groups then also called on the government to engage in the work on reconciliation with support from Russia, the European Union and other regional and international players.

Kemarsky told Sputnik in December, that Moscow was ready to mediate the political process in the CAR, provided that the African country’s government and the opposition address Moscow with such a request.