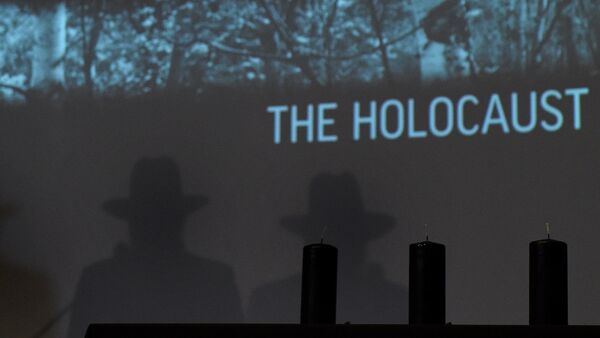 © AFP 2023 / VASILY MAXIMOV
Subscribe
International
India
Africa
On Sunday, the world commemorates Holocaust Memorial Day. The Holocaust refers to the persecution and extermination of up to six million Jews between 1933 and 1945 by Nazi Germany and its accomplices.

A poll conducted ahead of Holocaust Memorial Day has revealed that at least five per cent of UK adults do not believe that the Holocaust took place, while eight per cent argue that its scale has been exaggerated.

Almost fifty per cent of respondents admitted that they did not know how many Jews died in the Holocaust, and one in five grossly underestimated the number, which they thought stood at about two million.

More than 2,000 Britons took part in the poll which was carried out by the Opinion Matters for the Holocaust Memorial Day Trust (HMDT).

The survey's findings come after a poll, conducted by CNN along with the ComRes research company in November 2018, indicated that a third of Europeans know little to nothing about the Holocaust.

One in 20 respondents acknowledged that they knew nothing about the mass murder of Jews in the 1930s and 1940s, with half of those polled saying they knew "a fair amount". One in five said they knew "a great deal" about the Holocaust.

German Court Rejects Appeal of Elderly Holocaust Denier
Two-thirds of those sampled agreed that it was important to commemorate the Holocaust to keep the memory of it alive, although a third of respondents claimed that the massacre was now used by Jews to push their goals and own agenda.

The survey interviewed 7,092 people across Europe, with more than 1,000 respondents each in Austria, France, Germany, Hungary, Poland, Sweden, and the United Kingdom.

At least six million Jews, around two-thirds of Europe's Jewish population, died in the Holocaust at the hands of the Nazis.