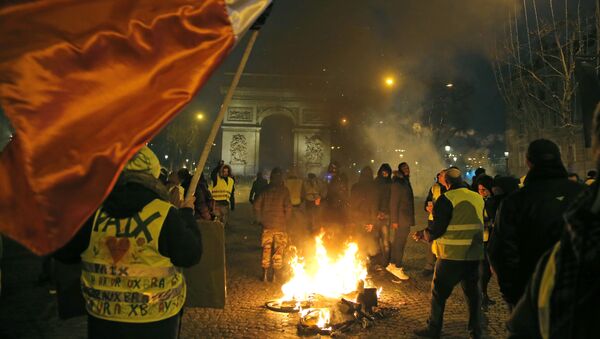 This Saturday, France witnessed its eleventh Yellow Vest protest in a row; they are often accompanied by riots and clashes, pitting demonstrators against the police.

About 69,000 people took part in Yellow Vest rallies across France on 26 January, including 4,000 protesters in the capital Paris, where the first-ever "yellow night" march took place.

Police detained at least 50 protesters during the rallies amid reports that Yellow Vest movement leader Jerome Rodriguez sustained an eye injury in clashes with police at the Place de la Bastille in Paris.

The "yellow night" rally was initiated by the movement's founder Eric Drouet, who was arrested in early January for organizing an unauthorized central Paris protest and who also faces trial for carrying a weapon.

France: The Yellow Vests overflows during the Yellow Night. 27-01-2019 pic.twitter.com/0GPeCuF5sV

Drouet earlier launched a poll on Facebook in which he asked Yellow Vest activists what protest movement they preferred next. The choices included a 48-hour demonstration, a boycott of multinationals and supermarkets, as well as blocking refineries and shopping centres and a night march.

France: The Yellow Vests overflows during the Yellow Night. 27-01-2019 pic.twitter.com/UB0fW1eLyZ

Most respondents have since said "yes" to the latter option, as calls for the protests in Paris to continue into the night on a regular basis have appeared in many Yellow Vest groups on Facebook.

France: The Yellow Vests overflows during the Yellow Night. 27-01-2019 pic.twitter.com/Re492XZoBh

"We'll gather every night from this Saturday onwards, and we'll keep coming till at least the end of the national consultation We'll make Place de la Republique our giant ring road", one of the Facebook posts read.

France: The Yellow Vests overflows during the Yellow Night. 27-01-2019 pic.twitter.com/BKKkG89nrg

The organizers, in turn, vowed that there would be no "violence" or "threatening behaviour" during the night rallies, which they said would be held by "pacifist citizens" who decry French police's "violent and undemocratic repression" of the Yellow Vest movement.

READ MORE: 'The Yellow Vests Will Triumph Where the Nuit Debout Failed' – Unionist

The Yellow Vest rallies (named after the reflective garment French drivers are required to keep in their vehicles) started in mid-November.
While the French government scrapped its planned hike in fuel taxes, which had initially sparked the protests, the Yellow Vests have evolved into a broader movement against unwelcome government policies and rising living costs. The rallies have been marked by violent clashes between protesters and police.