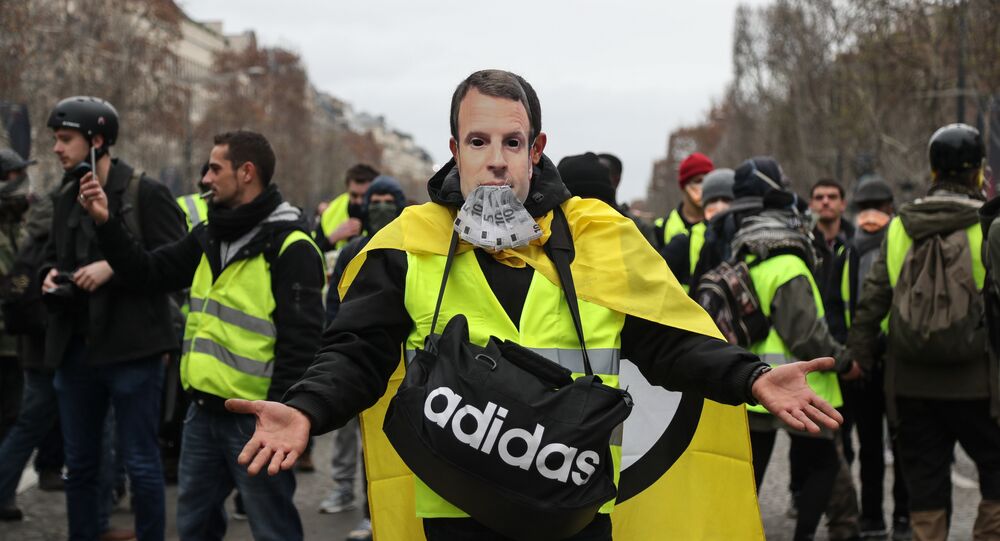 The ongoing wave of anti-government protests in France is not limited to the Yellow Vests; a lesser known movement, known as the “Red Pens”, is also on the rise. Comprised of teachers and lecturers who are disillusioned with traditional trade unions, the movement is calling for direct action.

Like the Yellow Vests, the "Red Pens" first appeared on Facebook, and although the movement was established just over a month ago, on 12 December, 60,000 people have already joined the group. This is particularly impressive considering there are only 880,000 teachers in the country.

Disillusioned with trade unions, they intend to achieve their objectives via acts of civil disobedience and other tactics, including seizing premises, refusing to report on progress, and urging parents to boycott schools.

Sputnik spoke to members of the "Red Pens" movement and trade union leaders about the possible unification of various protest forces in France.

Rodolphe Dumouch, a science teacher and member of the new movement, told Sputnik:

"I am surprised that this did not happen before. They have already been saying for 20 years that this will happen in 10 years. Now it really comes from people and that really scares the government. Over the years, most professions have depreciated, and their professional communities are beginning to protest one after another. And this is not the limit. I think that there will come the turn of physicians and pharmacists as well. In my opinion, the struggle is uniting but those in power will do everything to prevent this", he said.

"This will happen when farmers protest on the streets at the same time as civil servants, the General Confederation of Labour [Confédération générale du travail, CGT] with small traders unions and taxi drivers with the French National Railway Company [Société Nationale des Chemins de fer français, SNCF]. In short, the alliance of Poujadism and class struggle", the teacher added.

© AP Photo / Michel Euler
'Great Blah!' French Netizens Doubt Macron's 'National Debate' Can Calm Yellow Vests Down
At the same time, judging by a "Red Pens" press release published on 14 January, such a unification is still far away. Despite their assertions that "they are concerned about the problems that prompted thousands of citizens to unite in the movement of yellow vests", they clarify that the "Red Pens" are "not connected with them" and their demands are the demands of the representatives of their profession.

"[The] Yellow vests are a civil movement, and [we] are a professional one", the group said in the press release.

A mathematics teacher from the suburbs of Paris, who spoke to Sputnik on the condition of anonymity, was pessimistic about a potential unification, stressing that he "never believed in this idea" and does not take the "Blue Beacon Lights" and "Red Pens" movements seriously. However, he believes the Yellow Vests could be successful.

"Some representatives of the Yellow Vests movement are seeking to create a political organisation on its basis. But it turns out something like the Gallic village of Asterix and Obelix fighting alone against the superior forces of Rome. They are unable to find the accord. Perhaps, this is a genesis of a new form of constant protest of the crowds. But this cannot last long. The main thing is to return, perhaps as a result of a broad national debate, to an effective democracy and representation. But for this, it is necessary for the French to once again trust those who rule them. This, however, is not a purely French phenomenon. Others also face a similar problem, for example, such countries as Germany, the UK", he told Sputnik.

"There are too many biases on each side. You should put the cards on the table and think: what requirements are common to all?"

According to the expert, these divisions within society are being exploited by the government:

"The government manages to divide [the protesters], making it clear that there are still left and right, whereas the real difference is vertical: between an oligarchy, which believes that everything is permissible to it, and the destroyed basis [of society]".

"Yellow Vests, Blue Beacon Lights, Red Pens… It all looks like a rainbow. But do not underestimate the resentment of the French. Ultimately, these movements will merge, and there are already encouraging signs. Where the Yellow Vests are protesting, the retirees pick up the baton, replacing the workers; people communicate, exchange opinions", he told Sputnik.

"The Yellow Vests will triumph where the Nuit debout failed. The human factor is decisive, and this is a positive thing", Mr Chantelot added, referring to the Nuit debout movement, which protested against President Hollande's labour reforms.