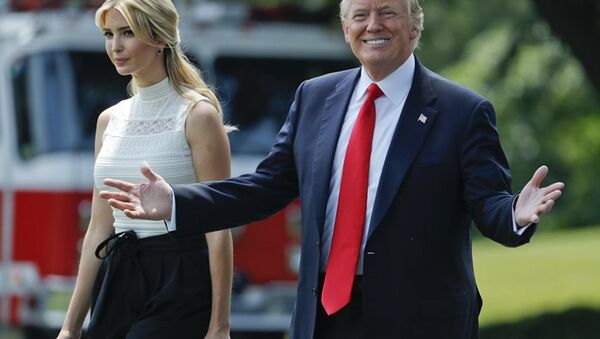 Donald Trump has repeatedly said that he is in good condition– claiming that his "stamina and strength" are some of his greatest assets. Yet now the US President is being accused of posting photos that make him look thinner and healthier than he is, as Gizmodo has revealed.

A number of pictures posted by the White House appeared to be edited with Photoshop or some other program, like Facetune, to make the president’s appearance slimmer. At least three photos, published by Trump’s official social media accounts, turned out to be altered.

Trump is editing photos of himself on Instagram and Facebook to appear thinner. He even removes his jowls and lengthens his fingers! pic.twitter.com/QudGWeVxZs

The original images were taken during official events and published on the White House Flicker page, while the modified versions appeared on Trump’s social media accounts. The key differences between the two were the changes to the suit – for example, it was smoothed out near his shoulder so that he looks trimmer, specifically around his neck; hair – Trump’s haircut was slightly altered to remove stray hairs;  and the length of Trump’s fingers was increased – their size has long been ridiculed by the President’s political opponents.

Users were especially concerned about Trump’s hands.  Since the 2016 election campaign, the size of Trump’s hands has become a meme popular among his opponents. "I do not understand why his hands are the size of someone who is 5ft 2ins," rival Republican candidate Marco Rubio said during his campaign in 2016, saying that “you cannot trust men with small hands.”

“I have to say this: He hit my hands. Nobody has ever hit my hands. I have never heard of this one. Look at those hands, are they small hands? And he referred to my hands — 'if they are small, something else must be small'. I guarantee you there is no problem. I guarantee,” Trump responded during a standoff with Rubio on Fox News' Republican debate.

Social media users remain divided over the matter. Most of them have found it hilarious that the president’s team decided to use doctored photos.

You guys…the WH is altering photos of Trump to 1) make him look thinner and 2) MAKE HIS HANDS LOOK BIGGER. Watch how his finger grows in the GIF. 🤣🤣😭😭😭 #tuesdaythoughtshttps://t.co/LFCdhj9x4N pic.twitter.com/1fP3ti0ih8

"One of the more unusual differences is that Mr Trump's fingers seem to have been made longer." 🤔🖐️✋🤚https://t.co/CxNBiSkgmx

What accused? It's obvious, they were caught small handed.

Others, though, noted that it has become a new normal to edit the photos on Instagram and suggested that there is nothing sinful in wanting to appear a bit more good-looking than you are.

Ok, but who doesn't post edited images on social media?

Literally the least of our problems is Trump photoshopping his pix.

This is not the first time the Trump family has been criticized for making apparent enhancements to their photos. In 2017 critics claimed that the first official portrait for First Lady Melania Trump had been "heavily airbrushed" before it was released by the White House.