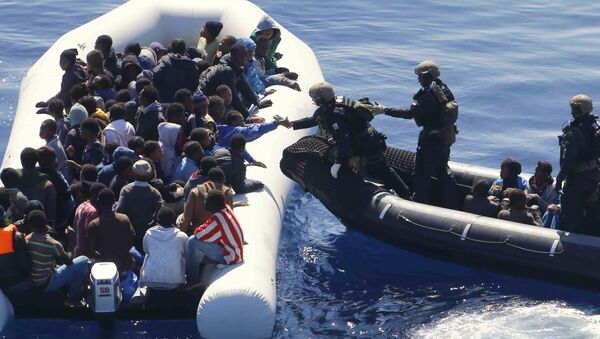 "Operation Sophia… combated the trafficking of human beings in the Mediterranean up to the point of almost stopping it completely, it trained the Libyan coast guard and it saved human lives… Sophia brought the whole EU into the Mediterranean, while Italy was alone there before 2015… If today Italy, which has the command and headquarters of the operation, no longer wants Sophia, we are ready to close it," the source told ANSA.

Matteo Salvini, Italian interior minister and deputy prime minister, said later in the day that the problem with Operation Sophia was that all the rescued migrants arrived exclusively to Italy, as was agreed with Italy's former prime minister, Matteo Renzi. Salvini added that in order for the mission to continue the rules had to be changed.

Record Number of Migrants Sent Back From Germany to Other EU Countries in 2018
Salvini said in December that Italy did not think it was possible to continue Operation Sophia unless the mission's rules were modified.

Earlier in the day, it was reported that Germany would pull out of Operation Sophia because of Italy's decision to not allow rescued migrants to disembark at the country's port.

In December, the European Union agreed to prolong Operation Sophia, formally European Union Naval Force Mediterranean (EUNAVFOR Med), which aims to rescue migrants in the Mediterranean Sea as well as counter human trafficking, until March 2019. The mission was prolonged for three months instead of a year, as has been done before, because of Italy's desire to change the mission’s regulations in order to avoid accepting migrants rescued in the central Mediterranean route.

As of June 2016, the mission has also been training the Libyan coastguard.