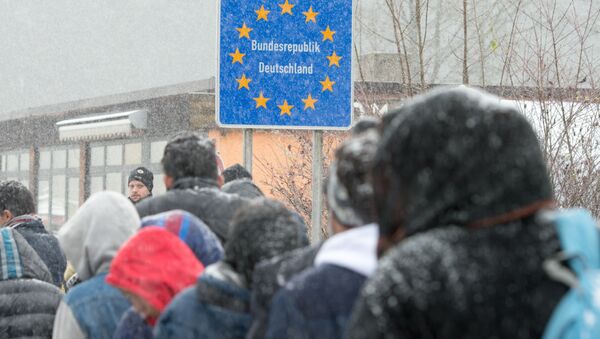 The spike is viewed as a sign that the Dublin Regulation, which allows for refugees to be sent back to the country where they first entered the continent, is being put into practice more efficiently, although it remains an irritant for migrant entry points like Hungary, Greece, and Italy.

From January to the end of November 2018, Germany deported 8,658 asylum seekers to other EU countries, which is more than the previous year’s record of 7,102 deportees, the German outlet Sueddeutsche Zeitung reports. The newspaper cites the country’s Interior Ministry’s response to a corresponding request from lawmaker Ulla Jelpke, representing the left-wing party Die Linke.

According to the report, in 2018 every third asylum case of the Federal Office for Migration and Refugees (BAMF) fell under Dublin Regulation, which is intended to determine which member state is responsible for an asylum claim. The EU's Dublin III Regulation stipulates that the country registering a migrant upon his or her arrival in Europe is the one that should process the corresponding asylum application.

However, German authorities also complained that Hungary did not accept a single refugee back, while only five asylum seekers were returned to Greece, as Athens also rejected the vast majority of requests for "mostly unfounded" reasons, according to the report. Additionally, deportations to Bulgaria were overturned in two out of three cases. At the same time, Italy remained the main destination for deportations, as almost every third person was sent there. Almost half of the 7,205 refugees who headed to Germany from other member states of the bloc came from Greece.

Jelpke, who requested the report, said that these figures point to the increased efficiency of the Dublin system, which she branded “unfair”, criticizing the attempt to put it into full practice as "simply inhuman".

European countries have been experiencing a severe migration crisis since 2015 due to the influx of thousands of migrants and refugees fleeing war and poverty in the Middle East and North Africa. Over the last year, Europe has been struggling to negotiate refugee quotas and a common European framework to share responsibility for immigrant arrivals. However, calls for European migrant gateway countries to take asylum seekers back and cooperate in accordance the Dublin Regulation have faced fierce resistance.

Italy, one of the main entry points for migrants in Europe, has been seeking to review the system as its new coalition government is pursuing a hard-line policy on immigration. Rome claims that the regulation is inadequate for managing migration flows and is calling for a fairer migrant resettlement system. Last summer, Interior Minister Matteo Salvini said that Italy could not remain Europe's "refugee camp", while neighbouring countries close their borders and defend their borders with weapons. He also pledged to close Italian airports to any aircraft with migrants from Germany or any other EU country on board.