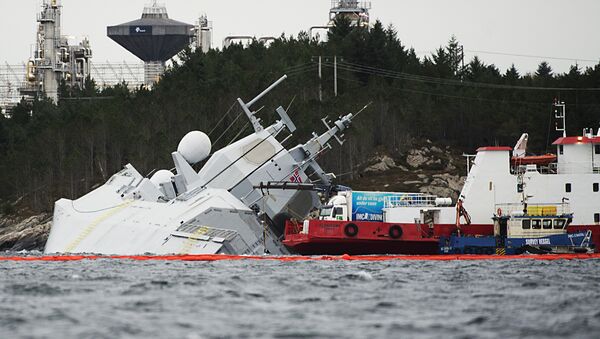 In an annual speech, Norwegian Chief of Defence has lamented the dramatic loss of a frigate following the major NATO drill Trident Juncture and utilised the "Russian threat" as a pretext for a naval beef-up.

Norwegian Chief of Defence Haakon Bruun-Hanssen has called the loss of the prized frigate KNM Helge Ingstad a "tragedy" and warned that Norway must acquire several naval vessels to keep up with its security needs.

"The loss of the frigate is key for our ability to defend. Frigates are the only system we have in the Armed Forces that can wage a war in three dimensions simultaneously. We have therefore lost considerable capacity", Bruun-Hansen said in his annual speech, as quoted by the newspaper Verdens Gang.

While admitting the "errors made", he also praised personnel for the prompt evacuation of the frigate. At the same time, he called for a Navy beef-up. Despite the fact that the Norwegian government is slated to present the next long-term plan for the Armed Forces in 2020, Bruun-Hansen has already made it clear that new operational departments and military vessels are on his wish list.

By 2025, when Norway's coastal corvettes are scheduled for scrapping as the new force of F-35 fighter jets becomes operational, the Navy will be left with only a handful of frigates and submarines.

"The vacuum we leave will undoubtedly be filled by others, and may thus weaken the stability we seek to maintain. In order to maintain a sufficient Norwegian maritime presence in the northern areas, the size of the Navy must therefore be increased", the Chief of Defence said at the Oslo Military Society.

Bruun-Hansen recalled the plan "4 times 30" launched by former US Defence Secretary Jim Mattis. According to the plan, NATO nations must be able to mobilise 30 land battalions, 30 air fighter squadrons and 30 navy ships within 30 days after being alerted. According to Bruun-Hansen, such requirements cannot be met with today's military infrastructure.

"Given today's structure and responsiveness, we'll be neither able to satisfy the increased national needs, nor meet the increased demands from NATO", admiral Haakon Bruun-Hanssen said in his annual speech.

Bruun-Hansen cited Russia as a source of uncertainty in the north, stressing that Moscow has missiles available that can reach targets throughout Norway and the Barents Sea. Bruun-Hansen also claimed that Russia "simulated attacks on Norwegian military infrastructure and allied forces", adding that this "creates uncertainty about Russian intentions".

"Modern missile systems have deployed on land, at sea and on fighter jets to cover the entirety of Norway and the Barents Sea", Haakon Bruun-Hanssen said.

Bruun-Hanssen also claimed that Russia's new fleet of multi-role submarines is of particular concern for Norway. These are silent submarines with missiles that can threaten targets both in Europe and in the US, and can attack an "important, but vulnerable" seaway that the US may use to reinforce Europe's military, he stressed. As a NATO member, Norway has a special responsibility to locate these submarines, most preferably before they sail out into the Atlantic.

The 134-metre-long Helge Ingstad collided with the Maltese-flagged tanker TS Sola when returning from the Trident Juncture NATO drills. Most of its expensive equipment is believed to have suffered considerable damage from saltwater. The preparations to salvage the frigate are still underway.