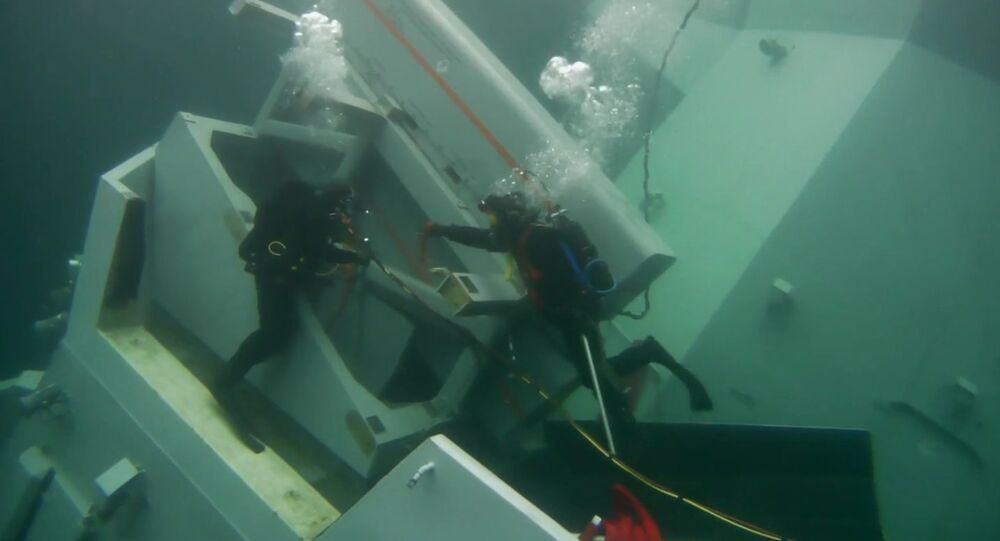 The inexplicable collision involving the frigate KNM Helge Ingstad returning from NATO naval drills has set the Norwegian Navy back billions of kronor, while the Maltese-flagged and Greek-owned oil tanker is expected to return to service by the end of December.

Norway's Defence Ministry has released underwater footage showing, for the first time, the extent of the damage to its frigate KNM Helge Ingstad, which sank after colliding with an oil tanker erroneously taken for an immobile object.

The footage, uploaded to Dropbox due to temporary website failures, was taken by a marine diving unit (MDK) normally used for planting and disarming underwater mines, ammunition and bombs. Its members have been diving around the mostly sunken wreckage of the frigate for weeks, removing ammunition, weapons and other hazardous material.

Previously, the damage to the hull of the frigate was believed to be a long gash in the starboard side. The footage taken from the depth of the Hjelte Fjord, where the vessel lies half-submerged, indicated that the damage is much worse than thought. The gash was estimated at around 45 metres long and eight metres high. By contrast, the tanker only suffered minor damage and is expected to become operative again by the end of December.

The video shows cabins and rooms smashed, flooring torn up and ventilation fans hanging from what's left of ceilings. The footage also shows what used to be the vessel's accommodation area, sleeping quarters, machine rooms and a generator room.

"It's really something to see one of our frigates lying under water", Commander Bengt Berdal, the leader of MDK, told Norwegian broadcaster NRK. "When we see the hull torn apart in this way, you can only imagine what it was like for those on board".

Berdal called it "sheer luck" that all 137 people on board the frigate survived the collision, with only a few sustaining minor injuries before successfully being evacuated in the early hours of 8 November.

Meanwhile, Rolf Ole Eriksen, former accident preparedness official for oil company Norske Shell and now a maritime security consultant, has penned a searing commentary in the newspaper Aftenposten. In Eriksen's own words, "only a miracle averted a gigantic catastrophe that had potential for large loss of life, fire, explosions and extensive pollution". The frigate was returning to its home port at Haakonsvern in Bergen after participating in NATO's huge drill Trident Juncture around Trondheim and was carrying weapons, ammunition, missiles and helicopter oil in addition to its fuel.

Eriksen was highly critical of the preliminary report released by Norway's accident investigation commission, venturing that the investigators were downplaying the severity of the collision between a fixture of the Norwegian Navy and fully loaded oil tanker, and clouding the responsibility. According to Eriksen, the responsibility lies with the crew on the bridge of the KNM Helge Ingstad, which the report was "under-communicating", he claimed. The frigate was sailing at a high speed of 17-18 knots, with its crew oblivious of their own whereabouts or the appearance of the tanker, which was sailing out of the Sture terminal in Øygarden northwest of Bergen.

"With its top modern radar and navigational equipment on board, the frigate was capable of following every movement of all vessels in the area", Eriksen wrote.

A more detailed and conclusive report may take months to be released. Meanwhile, the frigate lies mostly underwater. Around 350 people are now working every day in connection with the salvage of the frigate.

Commander Berdal calls the divers' work "challenging" and dependent on good weather. So far, the salvaging mission has been delayed several times by storms. The vessel won't be raised until 25 December at the earliest. The collision has cost the Norwegian Navy billions of kronor and resulted in the nation's maritime defence being greatly reduced.