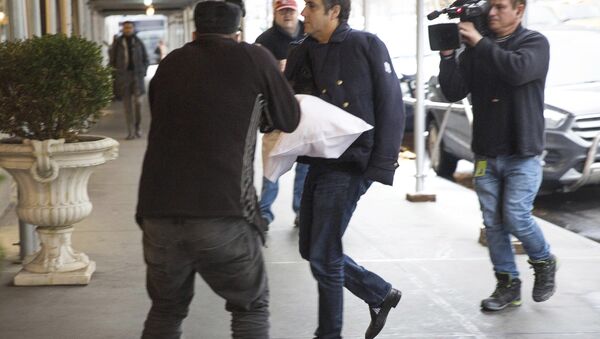 Michael Cohen, US President Donald Trump's former longtime lawyer and fixer, lit up the Twittersphere on Friday after he was photographed heading home with what appeared to be a black eye and his left arm in a sling.

Photos snapped of Cohen show the prison-bound New Yorker walking toward his Manhattan home, carrying a white pillow on which his left arm, wrapped in a sling, rested. Also spotted was a red wristband on his right arm similar to those given at hospitals and a bandage on his right hand where one would administer a cannula, a thin tube connected to an IV drip that's inserted into a vein. 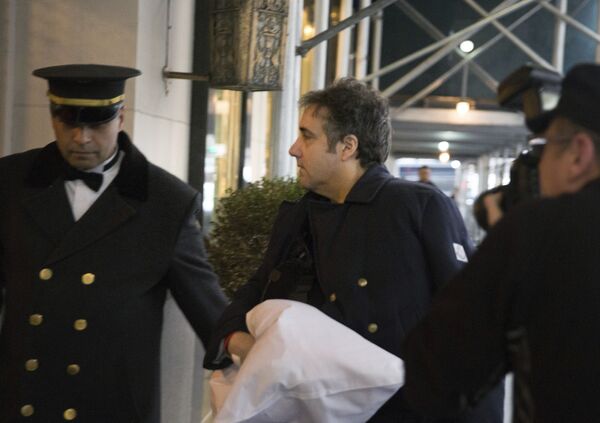 Michael Cohen arrives at his home in New York with his left arm in a sling supported by a pillow Friday, Jan. 18, 2019.
© AP Photo / Kevin Hagen

Looking all sorts of disheveled, Cohen sent netizens running for their deerstalker hats and magnifying glasses in an effort to figure out what happened to him. Was the lawyer attacked for his wallet, or was he left battered and bruised as a message from his ol' pal Trump?

The Twitterverse wanted to know.

​Alas, Cohen's appearance wasn't the aftermath of a mafia showdown. In fact, it was just the result of a scheduled medical procedure, Eleanor McManus, Cohen's spokesperson, told the New York Daily News.

"[It] was one of those in-and-out procedures he had to get done," she said, adding it was just "minor" surgery.

Cohen's operation came on the same day US lawmakers announced that they're looking to verify claims made in a recent BuzzFeed story that suggest Trump directed Cohen to make false statements to Congress about his efforts to build a Trump Tower in Moscow.

"The allegation that the President of the United States may have suborned perjury before our committee in an effort to curtail the investigation and cover up his business dealings with Russia is among the most serious to date," Rep. Adam Schiff (D-CA), who serves as the chairman of the House Intelligence Committee, wrote on Twitter. "We will do what's necessary to find out if it's true."

Late Friday, Special Counsel Robert Mueller's office released a statement denying the allegations made in the BuzzFeed report, calling the claims "not accurate."

Cohen, who is expected to begin his three-year prison sentence on March 6, is scheduled to appear before the House Oversight Committee on February 7.