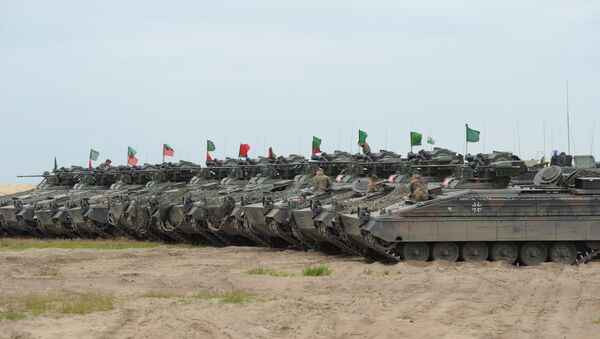 "To guarantee the safety of our citizens and strengthen our role in the world as a real global player, it is necessary to move decisively in the field of security and defence… We need to show determination and create a real European army," Sanchez said at a session of the European Parliament in Strasbourg.

He recalled that the European Union had managed to initiate the Permanent Structured Cooperation programme in 2017 to enhance EU military and defence cooperation.

"We have laid the foundations for creating our own defence capabilities after decades of inaction", Sanchez said.

World
Trump Challenges Macron: EU Army 'Didn't Work Too Well' in WWII
In November, French President Emmanuel Macron said that the European Union should have a "real European army", independent of the United States, to be able to defend itself. German Chancellor Angela Merkel has supported the idea while US President Donald Trump has criticised it.

EU foreign policy chief Federica Mogherini denied intentions to build an EU army, just as NATO head Jens Stoltenberg warned that EU efforts should not compete with the alliance, which he called the bedrock for European security.

The conclusions by EU leaders at their December summit stated that the bloc's own defence initiatives strengthened the European Union’s strategic autonomy, but only when paired with NATO activities.