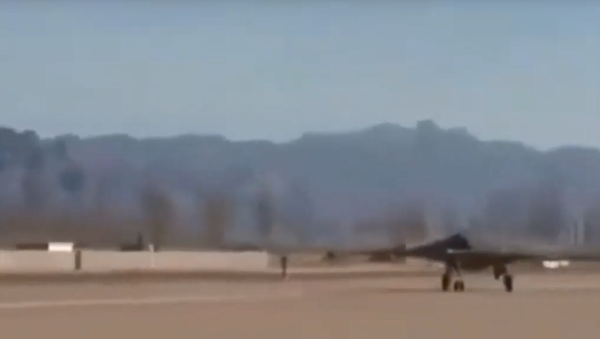 © YouTube screenshot
Subscribe
International
India
Africa
First unveiled at an air show in November, China’s newest stealth drone, the Sky Hawk, will have the ability to communicate with manned aircraft for both surveillance and combat operations. China Central Television (CCTV) carried footage of its first recorded flight on January 5.

Science & Tech
China's Self-Developed Large Drone Xiangying-200 Completes Test Flights
The stealthy Sky Hawk is only the latest in the line of unmanned aerial vehicles under the name by maker China Aerospace Science and Industry Corporation (CASIC), but it's a world away from the rest of the pack. It was unveiled at the 12th China International Aviation and Aerospace Exhibition, better known as the Zhuhai Airshow, in November alongside another stealthy drone of a similar flying wing design, the CH-7, which CBS called a "combat drone." It's not known what the new Sky Hawk's designation is, but the South China Morning Post said it will have both combat and reconnaissance roles.

The Sky Hawk is also much, much smaller than the CH-7, with a wingspan of merely 35 feet, compared to the CH-7's 72-foot span.

This wasn't the UAV's first flight, which CASIC says happened back in February 2018. However, it's the first time the public has gotten to see it zoom around. Observers immediately noted its superficial similarities to the US' X-47B drone, built by Northrop Grumman for the US Navy, although the X-47B is also much larger than the Sky Hawk, with a 62-foot wingspan and roughly 44,000 lb weight. The Sky Hawk weighs in at a paltry 6,600 lbs.

The Sky Hawk can reach altitudes of 42,000 feet and cruise as fast as 460 mph, with a maximum flight time of 15 hours, the Global Times noted.

But the Sky Hawk isn't just stealthy, it's also smart. It's well-equipped to handle the emerging field of "manned-unmanned teaming" (MUM-T), a program designed to partner drones with living, breathing pilots up in the air.

"Battlefields of the future will be very intense and confrontational, and stealthy drones like the Sky Hawk will have a huge role to play," Ma Hongzhong, its chief engineer at China Aerospace Science and Industry Corporation, told news portal Thepaper.cn on Thursday. "Manned-unmanned teaming is the technology of the future… and the Sky Hawk has such a capability."

​SMCP noted that last April, plane maker Airbus announced its H-145M helicopter and an Austrian Schiebel S-100 UAV had successfully made MUM-T work. The US military is also trying to harness the technology for similar purposes, but "So far, no country has perfected it as far as I am aware," Singapore-based aviation expert Kelvin Wong told the publication.

The Global Times noted that the Sky Hawk will be able to operate from aircraft carriers that are equipped with electromagnetic catapult launch systems. No Chinese carrier yet built uses any kind of catapult system, but the US Navy's new Ford-class carriers have such a system, called EMALS. However, it's speculated that the Chinese People's Liberation Army-Navy may have such a ship in the works, due to a curious image of a Chinese carrier lacking the ski jump used by present PLA-N designs, Sputnik reported.

DC Think Tank Says China's Third Carrier Can 'Put China in a Very Elite Status'
Back in April, Sputnik reported that the PLA-N was testing drones alongside manned fighter aircraft and even flying manned-unmanned sorties.

"The joint operations of manned military aircraft, like fighter jets, and UAVs is the drone's future," said Shi Wen, the designer of China's Rainbow attack drones, the Global Times reported.