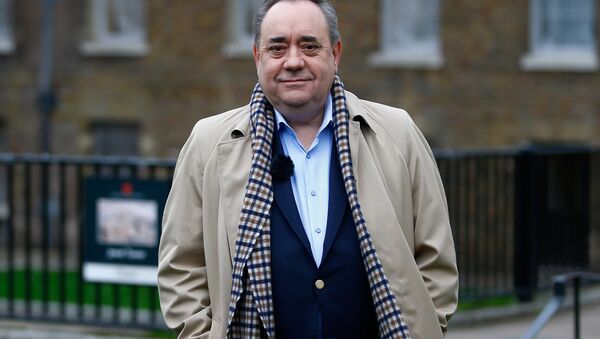 Tommy Sheridan
All materials
If it looks like a duck, walks like a duck and sounds like a duck chances are it is a duck. Now replace duck with witch-hunt and you have the essence of the ‘sexual harassment’ case against Scotland’s former First Minister Alex Salmond.

On the back of incredible lashings of tabloid and broadcast media coverage almost five months ago, beginning on 24th August 2018, we were invited via sensational headlines, loaded paragraphs and ‘leaked' details to conclude that Alex Salmond was a sexual predator guilty of instances of sexual harassment that were worthy of a criminal investigation and informed that he had been properly and fairly investigated by the Scottish civil service and the police had been invited to conduct an enquiry into his alleged conduct.

Alex Salmond 'Not Adequately Informed' About Harassment Allegations - Lawyer
Immediately one detail sounded an alarm bell in my head and made me suspicious of the whole story. The alleged conduct at the centre of the investigation was said to have occurred in 2013, while Mr Salmond was Scotland's First Minister, but was not complained of until 2018. If rape or serious sexual assault is being alleged against anyone the time lapse before reporting should not be considered critical. There are a multitude of very reasonable reasons why a woman may decide against reporting a rape or sexual assault against her. Such assaults should never be time-barred and alleged assailants should always be liable for their actions regardless of the lapse of time. But Alex Salmond was not being accused of rape and when the details of some of the allegations were made public in glorious detail by the red top tabloid which splashed the story the stench of a witch-hunt grew stronger.

I read the Daily Record of 25th August 2018 with a heavy heart. In a "world exclusive" they were publishing the details of the sexual harassment allegations against Alex Salmond. Over a period of thirty years or so I had campaigned alongside Alex Salmond against Thatcher's Poll Tax, in opposition to water privatisation, for Scottish independence and in 1999 we met in the Scottish Parliament to discuss his party's attitude to my Private Members Bill to Abolish Poindings and Warrant Sales. He was candid and cooperative regarding the Bill. He promised his party's support for it and he delivered. Indeed one of his closest political colleagues at the time, Alex Neil, agreed to co-sponsor it.

Alex and I disagreed on economics. He was for the free market with some more regulation while I was for public ownership and control. Our disagreements were, however, always cordial. There was no malice in our verbal jousts. I respected his achievements within Scottish politics and his leadership of the SNP. Unlike others in the Scottish Parliament he tended to play the ball and not the man in the course of political discourse.

So Alex is a guy I quite like. To my face he has always been cordial and polite. I believe he led the 2014 Referendum Campaign with gusto, commitment and energy. The fact we came so close to success was in large part down to his leadership. His decision to stand down after the defeat was honourable but, in my opinion, unnecessary. So when I prepared myself to read the ‘sordid details' on that Friday morning last August I feared the worse. After fifteen minutes and detailed discussion with my wife Gail, who had also been sad to read the previous day's story, I found myself raging. There was nothing there which merited a criminal investigation. If this was the height of the allegations against Alex Salmond then the delay in reporting them became unwarranted and the referral to the police became inexplicable.

This guy's whole reputation was being destroyed on news bulletin after news bulletin, tabloid headline after tabloid headline and the referral to the police for a criminal investigation was the critical and most serious part of the story. Of course I could be wrong, not for the first time, but if the material so brazenly published by the Daily Record amounts to grounds for a criminal investigation I will be amazed.

Salmond Denies 'Ludicrous' Sex Assault Allegations, Sues Scottish Government
The real truth is Alex Salmond has been set up by political opponents aided and abetted by staunchly unionist newspapers and media outlets salivating at the prospect of taking down a champion of the independence cause. Let's get back to basics here. The media have this man condemned and guilty from the outset. The coverage against him has been outrageous. Whatever happened to ‘innocent until proven guilty'? But now we have the utter humiliation of a Scottish judge having to announce yesterday in the Court of Session that the investigation into Alex Salmond was: "unlawful in respect that they were procedurally unfair and that they were tainted with apparent bias".

This was a result of Salmond's Judicial Review proceedings against the Scottish Government in respect of their internal investigation and should cause complete embarrassment to the senior civil servants who drove the whole process forward. What we now know is shocking and stinks to the high heavens.

A senior civil servant somehow learned of the alleged incidents in 2013 and sought out the two women concerned. These women, who had not seen fit to report the incidents for over four years, were ‘encouraged' to report them retrospectively. The code of conduct rules pertaining at the time, of initial contact with the women, were not conducive to such retrospective reporting and investigations so the senior civil servants already involved in the process decided to re-draw the code of conduct rules to allow such reporting and investigation. Then the most senior civil servant appointed the one who had made initial contact with the women as the Investigating Officer. So the woman who had already discussed the alleged misconduct with the two Scottish Government employees was now to carry out a proper, fair and impartial investigation!!! Aye right. And then deny the complainant, Alex Salmond, access to the evidence or the right to introduce witness statements on his behalf. No bloody wonder the judge threw the whole thing out yesterday.

It has been a sham from start to finish and while Nicola Sturgeon as current First Minister has been right to emphasise that absolutely no one is beyond reach when it comes to inappropriate behaviour and apologised to the complainers for the shambolic conduct of the investigation there should have also been a public apology to Alex Salmond. An apology for having subjected him to such an unfair investigation in the first place and an apology for the very damaging leaks in the investigation which have seriously damaged his reputation and standing in society. No wonder Alex is contemplating suing the government for damages in respect of his treatment.

Alex has called for the resignation of Leslie Evans the Permanent Secretary in Scotland, making her Scotland's top civil servant. He is right to do so. She has been incompetent at best in this whole saga and nefarious at worse. She appointed the senior civil servant to investigate the complaints against Alex Salmond and insisted for months that the whole process was fair and proper. However her story was fatally wounded on December 14th last year when a court order seeking independent review of hitherto redacted emails and notes pertaining to the investigation into Salmond was won by his legal team in the teeth of opposition by the Scottish Government legal team.

So in December Leslie Evans must have known that the emails and notes being sought by Mr Salmond were helpful to his case and would prove the investigation into him was unfair and therefore illegal. Yet she instructed the legal team to oppose that order. If the judge had not disagreed with her QC the documents would have remained hidden and the whole 4 day hearing scheduled for next week would most likely have proceeded.

Save Scotland From the British Union - Not Britain From Brexit
The emails and notes revealed that the same civil servant who had contacted the women prior to the complaints being made was appointed to ‘independently' investigate the complaints. That woman was Judith Mackinnon. She was appointed by Leslie Evans. Either she knew it was unfair to be in prior contact with complainers before independently investigating their complaints and that it was wrong and unfair or she didn't know which makes her incompetent. Either way she should be in the process of clearing her desk today. Craig Murray, himself a former senior civil servant but now a ‘troublesome' Indy campaigner, has called for hear head also in his excellent blog.

Incredibly Leslie Evans would have us believe she appointed Judith Mackinnon to conduct the investigation into Alex Salmond but didn't know she had had prior contact with the complainers. Yes and pigs often fly!!!

If everything in relation to contact, prior knowledge and rigorous fairness of process was robust why oppose the release of the emails and notes in court on December 14th?

The reality is Leslie Evans and Judith Mackinnon, at least, were complicit in a biased, unfair and illegal investigation into Alex Salmond that was politically motivated and designed to ruin his reputation and standing. Nicola Sturgeon should be seeking the resignations of both these very senior civil servants and initiating a swift and focused public enquiry into the damaging press leaks which have occurred.

There's Opposition to Nukes' Presence in Scotland - Activist
The Scottish public has been saddled with a legal expenses bill that could amount to £500,000 because of the mistakes and incompetence of two senior civil servants, or their role in a political witch-hunt against Alex Salmond. Either way their respective desks should be getting cleared as you read this column. If the enquiry into the leaks to the press leads to their doors it would amount to misconduct in public office and should result in a police investigation.

Make no mistake about it the assault on the character and standing of Alex Salmond was considered and planned. It was a conspiracy involving at least the two individuals above named. In the interests of transparency and in pursuit of justice the emails and notes which the Scottish Government lawyers fought and failed to keep private should now be produced excerpting only the individual details of the complainers in this sorry mess.

Let us all see who else, if anyone, was complicit in this witch-hunt against our former First Minister and independence champion.

The views and opinions expressed in this article are solely those of Tommy Sheridan and do not necessarily reflect Sputnik's position.