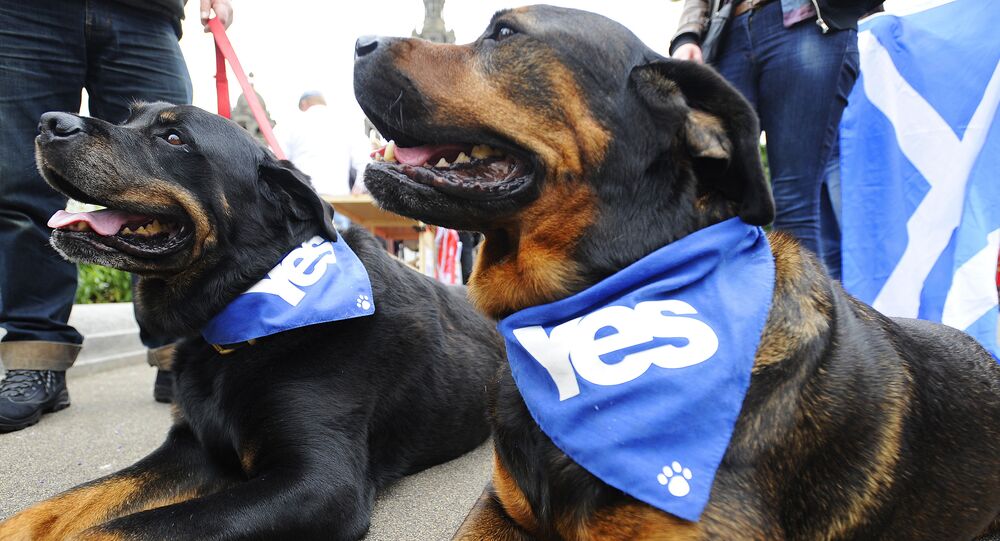 The Scottish First Minister Nicola Sturgeon made a statement that might brighten up all those who support independence for Scotland and worry those who are against the separation. Sputnik spoke about it to James Kelly, a political commentator.

Sputnik: How will Brexit outcomes (deal/no deal/second referendum) determine the future of Scotland?

James Kelly: It looks like Nicola Sturgeon is shaping up to set out a timetable for what she wants, to happen for a second Independence Referendum. If there is either a no-deal Brexit or if Theresa May's deal goes through — either of those options wouldn't make any difference, because the SMPs' redlines are that either Scotland or the whole of Britain should remain in both the Single Market and the Customs Union, which Theresa May's deal wouldn't deliver anyway — so, no deal or Theresa May's deal makes no difference.

Theoretically, if Britain stayed in the Single Market, even if it left the European Union, then that might hit off an Independence Referendum; but there doesn't seem to be any prospect of that. So the only way Nicola Sturgeon would try to push ahead with an Independence Referendum it seems would be if Britain remained in the European Union, which would require the People's Vote. That's probably the one thing that would prevent it happening.

Sputnik: What's the likelihood that a second Independence referendum will actually take place in Scotland?

James Kelly: That's very difficult to tell because all we're talking about is Nicola Sturgeon renewing her request (which she already made in 2017) for a Section 30 order which would unambiguously transfer the power to the Scottish Parliament to legislate for a second Independence Referendum. And we know that the last time that request was put forward, Theresa May's response was "Now is not the time."

And if anything, the Conservative Party's attitude has hardened since then, because we've since been through a general election in which the Conservatives gained a small number of seats in Scotland on the basis of a very hard-line opposition to a second Independence Referendum. So we have to assume that, when and if Nicola Sturgeon renews her request for a Section 30 Order, the response will remain "Now is not the time".

© AP Photo / Kirsty Wigglesworth
Conservative Leader in Scotland Says Second Independence Referendum 'Dead'
Then we would have to work out what would happen then, and it's quite hard to know because there are various permutations, so we would just have to see how it plays out. There could be a Westminster general election very soon, we could have a Labour government very soon (in which case we would then have to see what a Labour government would say rather than Theresa May) or Theresa May may step down and be replaced by another Conservative Prime Minister (we would then have to see what the new Prime Minister has to say about it). So there are a lot of different permutations, and we don't exactly know how it'd play out.

Sputnik: Will Scottish people choose this time to leave the UK?

James Kelly: I think there's a significant chance of that, because the "Yes" campaign in the Independence Referendum would start from a much higher base than four years ago — four years ago, they started from a very long way back, whereas now the opinion polls have been in the mid to high 40ies. So they only have to make up a small amount of ground.

Of course, there is no guarantee they will make up that ground. We know that from the Brexit referendum, from the Independence referendum, what tends to happen is that public opinion changes very quickly towards the end of the campaign — so it's not until you get really close to the polling day that you can really see how and which way people are breaking. So there's no certainty before the campaign gets underway, and we'll just have to see how it plays out. But certainly, they would have a fighting chance, a realistic chance of winning a campaign to make Scotland an independent country.

Sputnik: Could voters be more inclined to vote "Yes" this second time around because of the high chance of a no-deal Brexit?

James Kelly: Well, yes. In the 2014 Referendum, there was a "No" campaign based on fear, and one of the points of that fear campaign was that, if Scotland became independent, it would be outside the EU. So there was actually a fear, people were driven to vote "No" to stay in the UK out of the fear of leaving the EU — which sounds highly ironic in retrospect. This time, if there was another Independence Referendum, I'm sure the anti-Independence campaign would still use fear. But the "Yes" campaign would be able to point to fear as well, because there would be fear that if you don't choose independence, we are going to leave the European Union in a very disorderly way, and the consequences of that might be quite severe for Scotland's economy and for people‘s financial prospects.