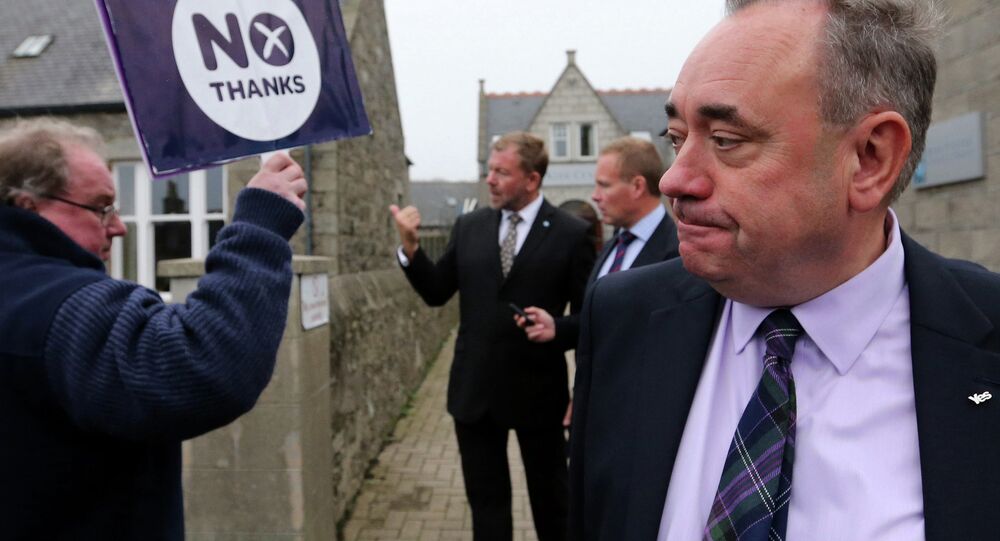 Ex-UK Envoy: Allegations of Salmond's Sexual Misconduct Fit Up to Discredit Him

In a statement, Salmond said he wanted to avoid internal division within the SNP, which has faced calls to suspend him. He says he intends to apply to re-join once he has had an opportunity to clear his name.

It emerged last week that two Scottish government staff members had lodged complaints in January about his behaviour when he was first minister. Salmond described the allegations as patently ridiculous and has also criticised the complaints procedure which he claims is unjust. He formally began legal action against the Scottish government in the Court of Session over its handling of the misconduct allegations.

© AFP 2021 / ANDY BUCHANAN
Scotland's Salmond Dubbed 'Kremlin Agent' Even Before His Show Launched - RT Editor-in-Chief
In a statement released on social media, Salmond said he had been a member of the SNP for 45 years, 20 of them as party leader and seven as first minister. Sputnik spoke to Craig Murray, former British ambassador to Uzbekistan about the developments around Alex Salmond.

Sputnik: What do you make of the situation around Mr Salmond?

We’ve not yet seen enough detail of the evidence or the defence for anyone to make a judgement as to the truth or not of the allegations. Having been subject myself personally to allegations against me by the British government and were undoubtedly untrue and a fit up of which I was eventually cleared.

© AP Photo/ Scott Heppell
Salmond Denies 'Ludicrous' Sex Assault Allegations, Sues Scottish Government
I know these things happen and so one possibility is the thing is a fit up in order to discredit the independent movement or discredit an important leader of the independence movement and I think people should no means dismiss that as one of the possibilities of what is happening.

Sputnik: What do you make of his decision to resign from the party, is that the right move?

Craig Murray: It is a decision for him. I think he’s done it with the best interests of the SNP in mind rather than his own personal interests and that’s typical of the man.

Sputnik: What do you make of the crowdfunding already hitting its target and was it right to ask for public support?

© AFP 2021 / ANDY BUCHANAN
‘BBC is Mouthpiece of Tory Government’ – Alex Salmond
Craig Murray: I think absolutely, these legal challenges are extremely expensive and he has right to his defence. I think we should be absolutely plain, there is no information at the moment that there is any criminal case or criminal allegations against Alex.

His crowd fund is to fund a challenge to a legal process in which he is challenging the civil service mover to not give him a hearing and not allow to him to defend himself within the internal civil service process.

Views and opinions expressed in this article are those of Craig Murray and do not necessarily reflect those of Sputnik.