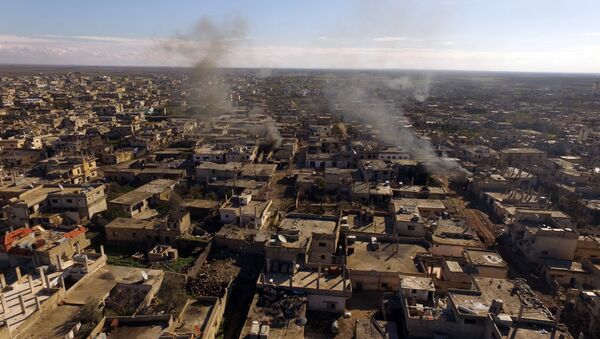 Kremlin spokesman Dmitry Peskov earlier stated that the presence of US forces in Syria does not help the political and diplomatic settlement of the crisis in the country. His remarks came shortly after President Donald Trump announced his decision to withdraw all US troops from the Mideast country.

Russia is not prone to overestimating the role of the United States in defeating Daesh* in Syria, Kremlin spokesman Dmitry Peskov told reporters on Friday.

According to the spokesman, the United States' chaotic and unpredictable decision-making is causing discomfort and concern in international affairs.

Peskov elaborated that Moscow still had no clear understanding of Washington's further steps in Syria and wanted more information about the planned withdrawal of US troops, announced by President Donald Trump earlier this week.

"The opinion is as follows, first, we need to understand how, when, where the Americans go, this is not yet clear. Second, we need to understand what the next phase is, nobody knows this either. Third, Russia, in fact, is the country that legitimately, under international law and at the request of Syria, assisted Syrians in freeing their country from international terrorism".

When asked about a potential US withdrawal of troops from Afghanistan, the Kremlin spokesman also stated that Russia didn't want anything to happen that could undermine stability in the country.

Russia Has Many Questions For BBC — Kremlin

Speaking about the UK watchdog's conclusion that RT broke broadcasting rules, Peskov said that there have been many questions about the British media, mainly the BBC, working in a biased manner.

He said that the Russian communications watchdog Roskomnadzor's inspection of the BBC could surely be regarded as a retaliatory response to the UK Office of Communications' (Ofcom) decision on RT.

Earlier in the day, Roskomnadzor said it had started checks to verify the BBC's compliance with Russian law after Ofcom accused the RT broadcaster of violating the regulator's rules and failing to provide unbiased news coverage in seven programmes aired in March and April. RT for its part, issued a statement, saying it was "extremely disappointed" with the results of the investigation.

On Counter-Measures to Support Russian Media Targeted by US Sanctions

The Kremlin spokesman further said that Russia will develop measures to support Russian media outlets that have been targeted by US sanctions, if deemed necessary.

Earlier this week, the US Treasury Department said it was imposing sanctions on Federal News Agency, Economy Today, and Nevskiy News, as well as the USA Really website.