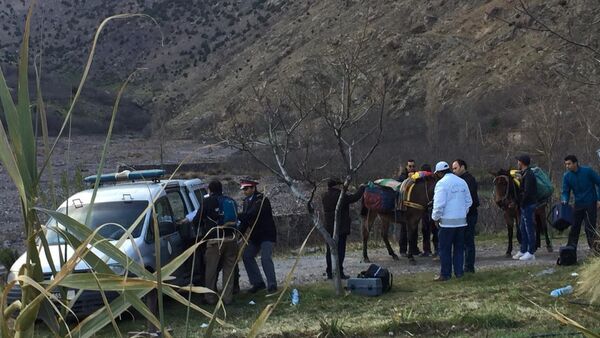 Two female hikers from Norway and Denmark were found dead in the Moroccan mountains with signs of brutal murder. According to local sources, the police are currently studying unverified footage of a killer using a blade to hack a blond woman's head from her shoulders.

The killing of the Scandinavian tourists in Morocco, who were beheaded in the mountains earlier this week, is being investigated as a terrorist act, the local police confirmed to AFP, having conducted a series of arrests.

In total, four suspects have been arrested on suspicion of having murdered Maren Ueland from Norway and Louisa Vesterager Jespersen from Denmark. The arrests in the city of Marrakesh follow a first arrest on Monday, hours after the discovery of the two women's bodies at a camp in the High Atlas mountains.

The first man arrested is suspected of belonging to an unnamed Islamic extremist group.

"Based on the information the police have about the suspects, they can not rule out the fact that they belong to a radical Islamic environment", Boubker Sabik, spokesman for the Moroccan National Council said, as quoted by AFP.

The first Moroccan suspect was arrested in Marrakesh on Tuesday morning. The police found his ID card near the crime scene. He was also likely to have been caught on a camcorder in the mountain village of Imlil, which serves as a base camp for climbers bound for Toubkal. During the interrogation, the man reportedly pointed out three fellow culprits. Another three fugitive suspects have been later arrested in connection with the murder of Scandinavian hikers. The suspects camped near the place where the women were found dead, both inside and outside the tent. An unnamed police source told AFP that one had been decapitated, while the other had a serious throat wound.

Albrecht Hofheinz, associate professor of Middle Eastern Studies at the University of Oslo, argued that terrorism in Morocco cannot be ruled out completely.

"Morocco is a relatively safe country, according to the Foreign Ministry. There has been little terrorist activity in the country in recent years, and as far as I know, there are no areas in the country that are controlled by terrorist networks", Hofheinz told national broadcaster NRK.

Nevertheless, Morocco was the site of terrorist attacks in 2003 and 2011 in Casablanca and Marrakesh respectively. In recent years, about 1,000 Moroccan youths have joined various terrorist groups in the Middle East.

According to Hofheinz, al-Qaeda*, which has a certain foothold in North Africa, is more likely than Daesh* to have carried out the attack. Still, he argued, there is an impression that the borders between crime and terrorism are quite fluid.

"The states in the area are often quick to blame terrorists, but I think we should be careful in claiming these killings to be terrorism. At the same time, it is impossible to exclude it", Hofheinz said.

The 28-year-old Norwegian woman was on a backpacking trip with her 24-year-old Danish girlfriend. They had travelled to Morocco on a Christmas holiday. On Sunday evening they set up their tent path in the Atlas Mountains on their way up to the Toubkal peak, the tallest in North Africa and the entire Arab world. On Monday, the two women were found dead, their throats slit.

Following the brutal killing, both Denmark and Norway changed their travelling advise. Under new safety provisions, it is now not advised to visit mountain areas alone, without a guide.

The Atlas Mountains,where the killing occurred, is a popular area that attracts many hikers from around the world.

* Al-Qaeda and Daesh (ISIS/ISIL/IS) are terrorist organisations banned in Russia.