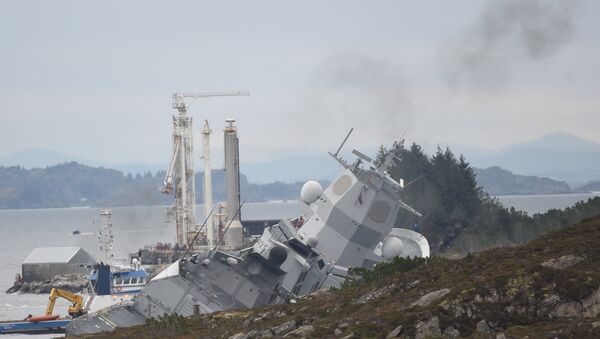 Amid their investigation of the Norwegian frigate KNM Helge Ingstad, which sank after NATO drills while formally under the alliance's command, experts have warned that the vessel's four sister ships in the Norwegian navy all suffer from the same defects and want answers from the Spanish shipyard that built them.

An interim report presented by the investigation committee looking into the circumstances of the KNM Helge Ingstad's collision with a tanker on November 8 includes several 'safety-critical' findings, Norwegian national broadcaster NRK reported.

First, the human factor was considered, as the frigate's crew is believed to have mistaken the tanker Sola TS for a 'stationary object'.

Second and perhaps even more important, the commission identified 'safety-critical' conditions that must be 'immediately taken care of'. According to the report, the ship's three 'watertight' sections were filled with significantly more water than the extent of the damage, a 10-meter-long gash on the starboard side, would suggest. Propeller shafts were found to have leaked water to the machinery room, which was quickly filled up. From there, water filled other rooms in the hull.

Former flag commander Jacob Børresen described the discovery of a possible error in the frigate's watertight sections as sensational.

'I want to characterise this as a dramatic discovery. In the event of an accident or collision this means that the ship is much more vulnerable than the premise was', Børresen told NRK, explaining that the fault potentially affects the largest rooms of the ship. 'The consequences of leaking water may be critical', he added.

The report suggested that the critical error most likely applies to several other vessels of the same origin. All in all, there are five frigates of the same Nansen-class as the KNM Ingstad, all delivered by the Spanish shipyard Navantia.

Børresen assured that a message has been sent to Navantia that they must review their designs and see whether this error occurs on other ships as well, calling the situation 'very special'. He also argued that the remaining Nansen-class frigates must be checked for errors as quickly as possible.

'If the other frigates all have the same defect, I assume there will be restrictions on which operations and sailing routes they can carry out before this is rectified', Børresen said.

The same day the report was published, Norwegian Chief of Defence Haakon Bruun-Hanssen pledged to implement temporary measures on all frigates of the Nansen-class as a result of its findings, assuring that the KMN Helge Ingstad's sister ships 'will sail'.

The Fridtjof Nansen-class frigates are the main surface combatant units of the Royal Norwegian Navy. The ships, ordered in 2000 and completed between 2006 and 2011, are named after famous Norwegian explorers, with the lead ship of the class bearing the name of Fridtjof Nansen, the Norwegian scientist, explorer and humanitarian. The five ships were ordered from Spanish shipbuilder Navantia (formerly known as Bazan). The ships are 134 meters long, 16.8 meters wide and have a cruise speed of 26 knots. The total projected cost for all five ships has been estimated at NOK 21 billion ($2.5 billion).