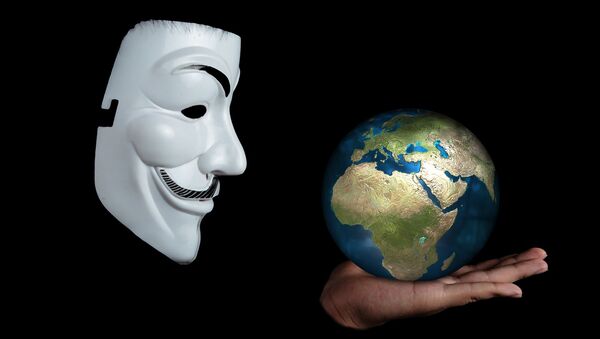 Sputnik has discussed the UK media coverage of the report, Washington's possible involvement in the case, as well as the EU response to it, with Asa Winstanley, a UK-based investigative journalist.

Sputnik: The Integrity Initiative has partially acknowledged the accuracy of the information provided by Anonymous. According to their press release, 'it is clear that much of the material was indeed on the Integrity Initiative or Institute systems, much of it is dated and was never used' and 'many of the names published were on an internal list of experts in this field who had been considered as potential invitees to future cooperation'. What is your take on this statement? How true is it?

Asa Winstanley: I take it with a good degree of scepticism. There might be some truth in that. They might not necessarily have contacted all these people on the list, but it is kind of predictable that they would sort of try to distance themselves from it. It seems that they are trying to give an impression that this is just some vague idea. It is clearly more organized than that. They are clearly working together with a lot of people to push these narratives.

Sputnik: It is reported that the US Department of State, NATO and Facebook have provided grants to the Integrity Initiative (1.96 million pounds was invested in the project). What is the level of Washington's involvement in the case?

Ex-Diplomat on UK Info War Plot: 'London Becoming Butler to US MIC Interests'
Asa Winstanley: We know that the British intelligence services and other British establishments worked closely together with Washington. So it wouldn't surprise me to find out that there was a great degree of coordination in that matter. Media in this country really (apart from RT and Sputnik) ignored the story.

Journalists should ask more questions about the Integrity Initiative. The media is all busy with Brexit, this is everything they are talking about. They should ask the government serious questions: what is all this? What is the involvement in this kind of propaganda? This is essentially propaganda and disinformation: working to promote what they perceive to be common interest around the world.

READ MORE: Media Deceptions: How the Public is Being Played Around the World

Mainstream journalists in this country portray themselves as neutral and like they're trying to get to the truth. But too often it is quite the opposite. They promote official narratives. And quite often they accuse the Russian government. I was reading The Times this morning and there wasn't anything about Integrity Initiative. They admitted that these documents are true. But where is the coverage of it? These are serious questions that the government and this organization should be answering.

Sputnik: Several Russian public figures are among the list of participants of the Integrity Initiative. For example, Igor Sutyagin, a military analyst and senior researcher at the Royal United Institute for Defence Studies, was accused of transmitting secret state information to a British consulting firm. Vladimir Ashurkov was an executive director of the 'Fund for the Fight Against Corruption' and an ally of opposition figure Alexei Navalny. Ashurkov was charged with fraud of 10 million roubles by a Russian court. Some of them have had problems with the law, but for some reason are considered opposition figures by the West. Why did the Integrity Initiative choose these people?

Asa Winstanley: It doesn't surprise me at all to learn that such an organization would be working with people around the world to promote what they want. They cooperate with people in Russia who had problems with the law and who are portrayed as dissidents. It's a kind of typical strategy of Britain and the West and they've been doing that since the Cold War and ever since before the Cold War. So to imagine that things are different now is very naive.

Sputnik: According to the documents, the Integrity Initiative is expanding its activities in Russia. Could such actions be considered a form of hybrid warfare?

Asa Winstanley: I would say so. They see it as the ways to push their narrative. It's warfare by all means: influence campaigns on Facebook, in the media. A lot of states are engaging in these kinds of strategies, pushing their propaganda around the world.

Sputnik: How should European countries respond to the information in these leaks?

Asa Winstanley: As it's been admitted in the press releases of Integrity Initiative, they're kind of trying to portray the leak as some kind of an aggressive act. But they've admitted that the leaks contain real documents. This release should be taken seriously. There should be an investigation into this organization.