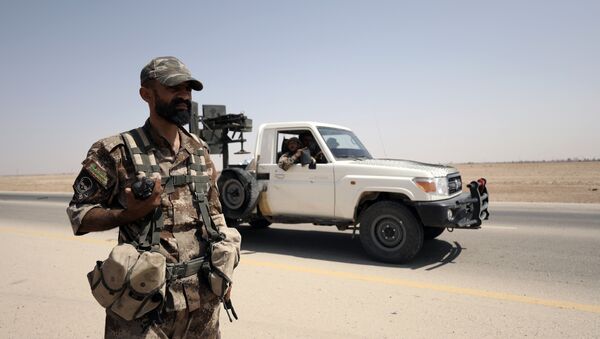 The Syrian Democratic Forces (SDF) is a coalition of US-backed militants with the stated goal of creating a secular, democratic and federalized Syria. The SDF is mostly composed of the Kurdish People's Protection Units (YPG), which Turkey considers a terrorist group.

The United States continues to supply arms and military hardware to the Syrian Democratic Forces (SDF) units as part of a military operation against Daesh* in the settlements of Hejin and Bagoz near the Syrian-Iraqi border, a senior SDF spokesperson was quoted by Sputnik Turkey as saying on condition of anonymity.

"We have received a total of 300 [US] trucks with machine guns, missiles, howitzers, as well as armoured vehicles and pickups. The weapons that came to us are stored in the warehouses of American bases and, if necessary, are distributed among the districts," the spokesperson said.

He added that the weapons are now delivered "at night and on top-secret basis so as not to attract the attention of the press as well as the public in Turkey and other countries."

The remarks came amid reports that at least 2,500 Daesh terrorists still use Hejin and Bagoz as their safe havens.

Earlier this month, SDF fighters reportedly repelled a number of counterattacks carried out by the Daesh in the eastern Syrian province of Deir ez-Zor.

The US Central Command spokesman, Navy Capt. Bill Urban, for his part, said that the SDF units "have temporarily suspended offensive actions against ISIS in response to cross border attacks by Turkey against SDF positions in northern Syria." Urban called for the de-escalation of the situation and emphasized that "unity of focus on the defeat of ISIS is imperative."

Afrin Conflict Diverted SDF Leaders, Limiting US-Led Coalition's Ops - Spokesman
The statement came after Turkish President Recep Tayyip Erdogan announced the upcoming launch of an offensive against the Kurdish People's Protection Units (YPG), a large branch of the SDF, in Syria. Turkey believes that the YPG is affiliated with the Kurdistan Workers' Party (PKK), blacklisted as a terrorist group by Ankara.

While the SDF is one of the parties engaged in conflict with the Syrian government, and Damascus considers its actions as illegal, the SDF itself insists that it is determined to fight the remaining strongholds of terrorism in the country, just as the central government is.

In May 2017, US President Donald Trump approved providing SDF units in Syria with heavy armaments, including mortars and machine guns.