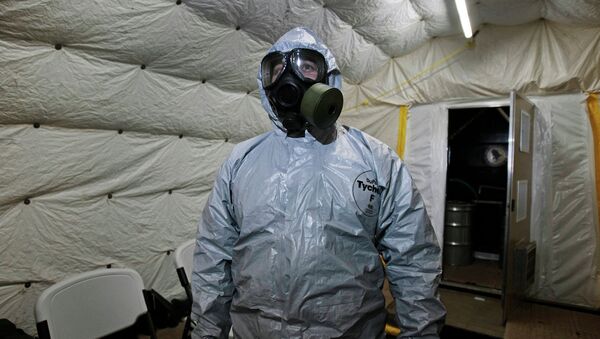 © AP Photo / Alfonso Perez
Subscribe
International
India
Africa
Earlier, the US representative to the Organization for the Prohibition of Chemical Weapons accused Tehran of failing to declare its chemical weapons capabilities, and charged the country with pursuing the development of such weapons "for offensive purposes."

"Once again America has leveled groundless accusations against Iran…which we strongly reject," Ghasemi said in a statement published on the Foreign Ministry's website on Friday.

World
US Claims Iran Failed to Declare Chemical Weapons Amid Concern Over US Stockpile
"Based on [OPCW] Conference procedure, the Iranian mission to the OPCW will give an appropriate response to these baseless accusations at the end of the general debates," he promised, without specifying the precise date. The current OPCW session will wrap up next Friday.

Turning the US allegations around on them, Ghasemi pointed to the US' own acknowledged chemical weapons program, and to suspicions that Israel, which signed but never ratified the Chemical Weapons Convention, may also have access to such weapons.

"The crystal clear point here is that the US is the only OPCW member state with chemical weapon arsenals, which has so far failed to fulfill its commitment to destroy them," the spokesman said. "At the same time, the US sides with the Zionist regime's chemical weapons program and levels such wrong and false accusations against Iran," he added.

According to Ghasemi, the ultimate goal of the US claims against Iran was to distract the international community from the violation of its own commitments and its continued support for alleged Israeli chemical arsenals and terrorist groups.

On Thursday, US permanent representative to the OPCW Kenneth Ward accused Iran of failing to declare its chemical weapons capabilities, including existing stocks, research, countermeasures and production capabilities.

Iran FM Asserts No Trust in Promises Made by Trump or Washington - Reports
Iran has acknowledged that it had a chemical weapons program in the 1980s. However, it did not use these weapons during the Iran-Iraq war of 1980-1988, when Iraqi chemical attacks led to the deaths of up to 100,000 Iranian soldiers and civilians. Iran was one of the first countries to join the Chemical Weapons Convention, signing it in 1993 and ratifying in 1997. Tehran declared that it had completely destroyed its chemical weapons arsenal by the time it ratified the treaty.

Earlier this week, Iran's Syrian allies voiced "concerns" over Washington's sluggishness in eliminating its chemical weapons, which is estimated to amount to some 3,000 tonnes of various agents. The George H.W. Bush administration committed to eliminating the US stockpiles at the end of the Cold War, with the elimination originally slated to wrap up by 2012. Since then, the deadline has been pushed back repeatedly to at least 2023. Russia, the successor to the US's Cold War Soviet rivals, destroyed the last of its once-vast stocks of chemical weapons in 2017 under OPCW supervision.

Relations between Washington and Tehran have been hostile for decades, with the United States designating Iran as a state sponsor of terrorism. Relations deteriorated even further after the US withdrew from the Joint Comprehensive Plan of Action (JCPOA), commonly known as the Iran nuclear deal, in May and reimposed sanctions on Tehran. The sanctions are aimed at exercising maximum pressure on Iran and force it to negotiate a new nuclear deal. As part of its campaign, the United States wants all countries to eventually reduce their Iranian oil imports to zero to damage the country's economy.
Newsfeed
0
Access to the chat has been blocked for violating the rules . You will be able to participate again through:∞. If you do not agree with the blocking, please use the feedback form
The discussion is closed. You can participate in the discussion within 24 hours after the publication of the article.
To participate in the discussion
log in or register
loader
Chats
Заголовок открываемого материала