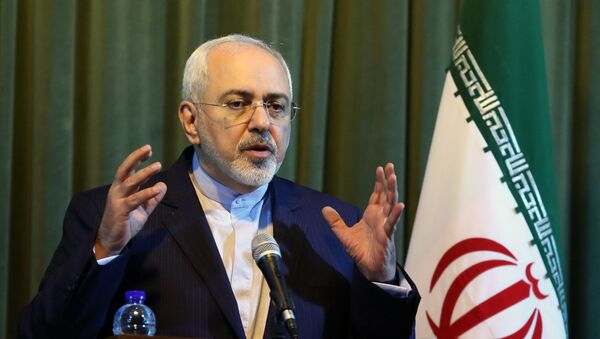 Iranian Foreign Minister Mohammad Javad Zarif said on Thursday at the MED Dialogues conference in Rome that Tehran - alongside the EU - remains committed to the 2015 Joint Comprehensive Plan of Action (JCPOA) nuclear deal, even though the United States withdrew its support in May, AFP reported.

Zarif pointed out, however, that the Trump administration cannot be trusted in further talks on any possible new agreements.

"If we are to make an agreement with the United States, what is the guarantee that the agreement will last after the flight? You remember Canada?" Zarif said, cited by AFP, referring to Trump's refusal to sign a G7 closing communique in June after Air Force One left the summit venue.

Iranian Revolutionary Guards Warn US Bases Within Tehran's Missile Range
"How are we to be confident that the signature stays on the paper?" Zarif stated.

Zarif and Italian counterpart Enzo Moavero Milanesi met in Rome on Thursday for talks on how to bypass newly reimposed US sanctions on Tehran.

The ministers discussed "the Iran nuclear deal and the special European mechanism to protect the accord following the US’ unilateral and illegal withdrawal," the Iranian Foreign Ministry said.

Milanesi reiterated Italy’s commitment to protect the agreement, together with other EU signatories, after the United States withdrew from it in spring.

US President Donald Trump has reimposed sanctions on Iran that were waived under the 2015 pact limiting nuclear research by Tehran. Trump told foreign firms in Iran to phase out operations by November or face penalties. The European Union vowed to continue trading with Iran outside of the dollar-based US financial network.

Despite Washington's unilateral move, the other parties to the deal — China, France, Germany, Iran, Russia, the United Kingdom and the European Union — have expressed their commitment to the historic JCPOA treaty.

On September 24, foreign ministers of the remaining signatories to the JCPOA agreed to create a Special Purpose Vehicle (SPV) on the sidelines of the UN General Assembly as a means to enable European companies to continue legitimate transactions with Iran in accordance with EU law.

Meanwhile, Tehran condemned on Wednesday Washington’s latest sanctions, calling them irrational and made under empty pretexts.

"These sanctions against individuals and legal entities are irrational and ineffective and will not bring the desired results to their authors and performers. Sooner or later they will realize that [the sanctions] do not bear fruit," Iranian Foreign Ministry spokesman Bahram Qassemi said in a statement.

READ MORE: Iran Working With EU on Alternative to SWIFT Amid US Sanctions