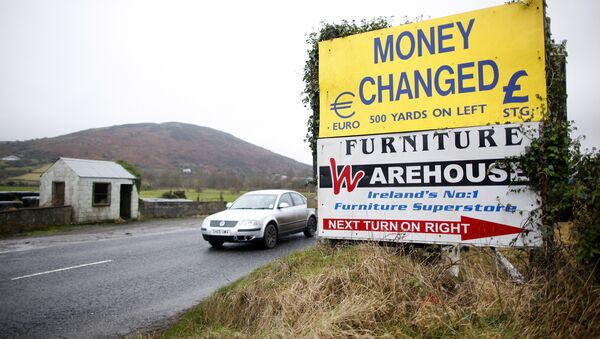 LONDON (Sputnik) - The European Union has "cynically" used the issue of the Irish border to push London into accepting an unpopular Brexit deal, standing against the interests of ordinary people in the UK and abroad, Paul Murphy, a member of the Irish parliament from the Solidarity–People Before Profit political alliance, told Sputnik on Wednesday.

"The EU has very cynically used the question of the border… There is a real problem that can only be addressed by a trade agreement… but the border question shouldn't be used to effectively blackmail any British government into signing up to these neo-liberal EU rules. And that is what has happened," Murphy said.

He added that the possibility of a no-deal Brexit should not make people accept the draft Brexit agreement negotiated by May.

"It is a possibility, yes, that there could be a no-deal Brexit, but I do not accept the idea that ordinary people in Britain should be blackmailed into accepting May's deal. Here, in Ireland, the entire establishment is united in the idea that this is a good deal and will avoid a hard border… but the deal is a neo-liberal deal. It's essentially a continuation of the neo-liberal rule of the EU in Britain and likely in the future having to follow those rules in regards to no state aid and no interference with competition etc," Murphy indicated.

He said that he desired a scenario in which May's deal was defeated in the parliament and led to an early election, in which Labour Party leader Jeremy Corbyn emerged victorious and ensured the deal's renegotiation.

"In Ireland, we would put pressure on the Irish government to agree to a renegotiation, and that Corbyn should negotiate on a trade deal that avoids any hardening of the border and excludes those neo-liberal provisions. And that would be in the interests of everybody in Europe," Murphy stated.

Murphy argued that the deal negotiated by May was supported only by big businesses and did not correspond to the interests of ordinary people in the country.

"It seems to me that [May's plan] is more likely to fail than not… So there will be that 'Project Fear' agenda in the coming weeks to build pressure on Tory and Labour [lawmakers] to pass it. So I think there's a battle to be fought there," Murphy indicated.

'It's Perfectly Clear' How UK PM Can Try to Win Brexit Deal Argument - Professor
Prime Minister Theresa May's currently EU-approved Brexit plan involves a number of controversial points, one of which provides for the UK's entering into a potential "backstop" arrangement post-2021 that would involve continued membership in the EU Customs Union as a means to avoid a hard border in Northern Ireland.

On Thursday, May defended a draft Brexit deal in the House of Commons. The agreement faced criticism both from the opposition and from the ruling party, with several members of May's cabinet having resigned over their disagreement with the deal.