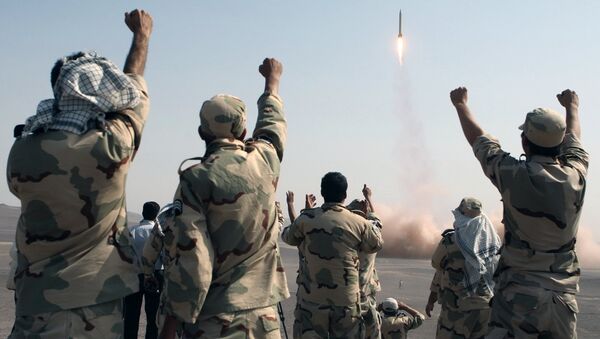 Iranian Brigadier General Hossein Salami has commented on President Trump's words about Iran's ability to take over the Middle East in 12 minutes by saying that Iran could do it swiftly even with the US military present in the region, Tasnim News Agency reported. Salami also added that Tehran has acquired the "capability to project influential power in the face of the US."

The brigadier general noted that US attempts to isolate Iran have ultimately failed, while at the same time, Washington had managed to "isolate itself" from the rest of the world and lost its ability to form political alliances. He further added that the US economy wouldn't be able to handle the cost of a war with Iran.

"The US economy is not capable of handling a new war. A combat with the Islamic Republic will push the war to outside the region, because the US military structure is worn-out and they [the US] have been almost driven out of the Persian Gulf," he said.

"US aircraft carriers are within the range of the ballistic missiles with pin-point accuracy that are capable of hitting mobile targets," he warned.

Salami was referring to a remark made by Trump during one of his rallies, claiming that prior to the current administration, Tehran was capable of taking over the whole Middle East in 12 minutes. The US president then bragged Iran is no longer able to do so and is instead allegedly just "trying to survive."

Earlier, another Iranian general, Ghasem Soleimani, cautioned US President Donald Trump against a conflict with Tehran. The warning was posted on the general's Instagram page, along with a Game of Thrones-style poster featuring Soleimani and a caption reading "I will stand against you."

READ MORE: Iranian General: US Will Have 'No Ultimate Victory' in War With Tehran

The post came in response to another poster, stylized after the popular TV series, published by Trump on his Twitter. The US president used it to announce that "sanctions [against Iran] are coming November 5," using the iconic phrase from the HBO series.

On November 5, the US will reinstate all sanctions against the energy, banking, and shipping sectors of the Iranian economy, which had previously been lifted under the JCPOA, or Iran nuclear deal.

000000
Popular comments
ivanwa88, It is as if you are an Iraq war veteran to seem to know so much about it. Or, you are JFOS. Probably the latter.