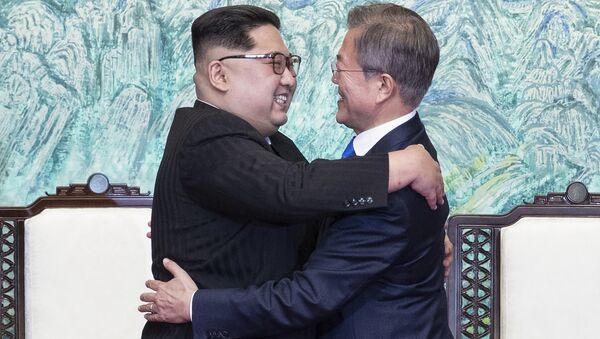 © AP Photo / uncredited
Subscribe
International
India
Africa
On Monday, the New York Times reported that South Korean President Moon Jae-in is succeeding where all of his predecessors have failed — in engaging North Korea and convincing the country to give up its nuclear weapons program.

However, the article isn't complimentary, quoting a South Korean newspaper that claimed Moon is Kim Jong Un's most effective spokesperson.

Simone Chun, a fellow at the Korea Policy Institute and a member of the Korean Peace Network, joined Radio Sputnik's Loud & Clear Tuesday to discuss how the US corporate media continues to attack the historic progress towards peace on the Korean Peninsula.

"What this article is suggesting is that Kim Jong Un is either manipulating Moon Jae-in or Moon Jae-in is the unwitting fool falling for deception," Becker said.

"In the article, they even describe Moon Jae-in as ‘the agent of North Korea.' It's a very carefully crafted editorial position designed to sabotage Moon Jae-in's effort to bring about peace on the Korean peninsula," Becker added.

In September, North and South Korea signed a joint agreement, proclaiming an end to the state of war. The two nations agreed to cease large-scale artillery exercises and military flights near the demarcation line and make efforts to denuclearize the peninsula.

However, according to the New York Times article, "[A]s Mr. Moon has pushed to deepen ties with Pyongyang, the backlash from his critics has been swift. A major South Korean newspaper this month called him the ‘chief spokesman for Kim Jong-un,' and an American commentator, quoting Creedence Clearwater Revival, recently referred to him as a ‘bad Moon on the rise.'"

"If Mr. Kim wanted to change his image from nuclear madman to mature negotiator, it's unlikely he could have found a better agent than Mr. Moon," the article stated.

The South Korean newspaper being referenced is chosun.com, "one of the most right-wing newspapers in South Korea--and, according to a recent poll, the least trusted media," Chun told Radio Sputnik. The Creedence Clearwater quotation comes from Gordon Chang, a "notorious right wing" columnist, she added.

"It is a shame [that the] New York Times is giving a platform for the very ultra right-wing and minority voices who are afraid of [the] Korean peace process and who are trying to sabotage the current peace talks," Chun told Sputnik.

"Based on these two sources [cited by the New York Times], there isn't much credibility on this particular article. The image they create is that president Moon is somehow a spokesperson for Chairman Kim. Nine out of 10 Koreans in recent polls support the peace process. I would argue that it's the Korean people [themselves] who are behind the peace process. The big picture, you see here, is a growing, orchestrated chorus of America's right wing think tanks, such as the Heritage Foundation and CSIS, in conjunction with the minority voices in South Korea, who are now in the process of sabotaging and trying to discredit Moon. I think it is very important to, as your media [Sputnik] is doing, respond to this horrendous claims," Chun added.

"If this peace plan between the two Koreans has the support of 90 percent of the Korean people and is going so well for Donald Trump, a Republican president, why would the New York Times place an article like that?" Kirikou asked.

"This is a propaganda piece that found its way into the New York Times," he added.

"The author of the [New York Times] article is actually Korean," Chun responded, also adding that the author has taken conservative viewpoint when it comes to foreign policy over recent years.

"The New York Times, when it comes to foreign policy, has often taken a conservative position" as well, Chun added.

Last week, Seoul, Pyongyang and the UN Command (UNC) on Monday agreed to withdraw firearms and military posts from the village of Panmunjom, known as the Joint Security Area, in the Demilitarized Zone, in what Chun called a "historic attempt" that reveals that the "two Koreas are very determined [to make peace.]"

"The two Koreas and the UNC agreed to take measures of withdrawing firearms and military posts from the JSA by October 25, and for the following two days, the three parties will conduct a joint verification," the South Korean Ministry's of National Defense news release said, according to the Yonhap news agency.

In June, Kim also reached an agreement with US President Donald Trump, stipulating that North Korea would make efforts to promote complete denuclearization of the peninsula in exchange for freezing US-South Korean military drills and a potential removal of US sanctions.