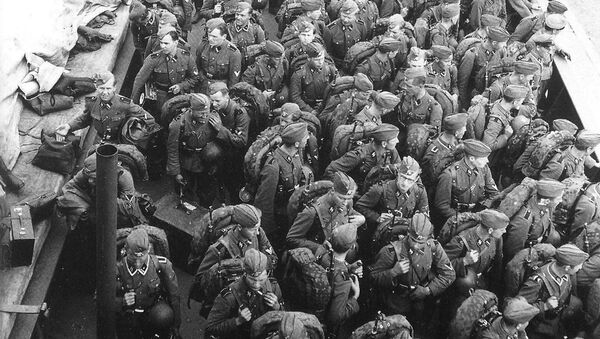 With his newly published book, "The Swastika Knights," university lecturer André Swanström challenges the traditional image of his compatriots in World War II, highlighting the Finns' participation in the execution of Jews and prisoners of war. Unlike in other Nordic nations, he claims, Finnish Nazis recieved no punishment.

In his book, Turku university fellow André Swanström cites the letters and diaries of 1,400 Finnish SS-men to prove their complicity in war crimes and crimes against humanity. According to him, the true actions of the Finnish SS troops on the Eastern front have been hushed up by historians.

"This is quite clear evidence that Finns participated in atrocities. There are also letters showing that Finns executed a politruk, that is a Russian political commissar," Swanström told Finnish national broadcaster Yle.

In one of the letters sent by a Finnish war correspondent in the SS battalion, demands to publish photographs of people who were executed were made.

Another compelling piece of evidence is a letter sent by car mechanic and SS soldier Olavi Kustaa Aadolf Karpalo to military pastor and fellow SS officer Ensio Pihkala, signed by five of his brothers in arms, asking for a transfer to the frontline.

"We cannot go back to Finland. We haven't fought for the greatness of Finland with weapons in hand. The case would be different if we were indispensable to our company as specialists. In addition, shooting skills far inferior that ours suffice to execute Jews," the men wrote.

Using SS soldiers' profiles, Swanström stressed that 45 to 46 percent of Finnish SS-men were members of the Nazi Party or members of a related organization. According to him, this information has always been available, but has been "overlooked."

The Finnish SS men belonged to the Wiking division, comprised of Germans and foreign volunteers, which took part in Operation Barbarossa, the 1941 invasion of the Soviet Union. The Finnish battalion was unique in that it was the only SS unit set up by a country not invaded by Nazi Germany. According to Swedish historian Lennart Westberg, this was done with the tacit support of the Finnish government and the general staff. However, open recruitment was avoided in order not to provoke the Soviet Union.

The regular units of the Wiking division took part in atrocities committed against Jews, Soviet officers and Roma, Swanström pointed out.

In their book "Himmler's Norway," Norwegian researchers Terje Emberland and Matthew Kott also wrote that Finnish volunteers participated in the massacre of Jews in Lublin, Poland in connection with the German invasion of the Soviet Union in 1941.

Swanström pointed out that the boundary between the Waffen SS and the concentration camp personnel was not as sharp and clear as the apologists claim. Instead, the staff were rotated back and forth, he stressed.

In June 1943, Hitler dissolved the Finnish battalion at the behest of Finnish Supreme Commander Carl Gustav Mannerheim, as more soldiers were needed to defend Finland. In the Lapland war in 1944, the Finnish SS-men were faced with the possibility to turn their weapons against their former brothers in arms. According to researcher Åke Söderlund, at least 31 former Finnish SS-men deserted Finland and switched allegiance to Germany.

Norwegians and Danes who joined the Nazi German forces as volunteers were tried for treason. In total, about 3,300 Danes and 4,800 Norwegians were convicted. By contrast, Finnish Nazi volunteers were demobilized from the Finnish armed forces and entered civilian life. They were never charged with war crimes.

Researching these issues is still problematic even in today's Finland. By Swanström's own admission, he has a secret phone number to avoid unsolicited attention.

"I have received quite a lot of unreasonable response, and the subject stirs strong emotions. If you criticize the Finnish SS men or come up with views divergent from the traditional one, then many people get offended," Swanström told Yle, stressing that SS-men seem to remain a very important part of the patriotic worldview. "You get slammed for lack of patriotism and left-wing sympathies," he added.

"Maintaining a false image of the SS men as heroes from decade to decade is no good. It's simply lying. It's time to update our written history to keep up with European and international dimensions," Swanström concluded.

At present, the Finnish National Archives are busy with an investigation on the extent to which Finnish SS-men were involved in the murder of Jews and civilians. The investigation started after Efraim Zuroff, the director of the Simon Wiesentahl Center, made a special request to Finnish President Sauli Niinistö.