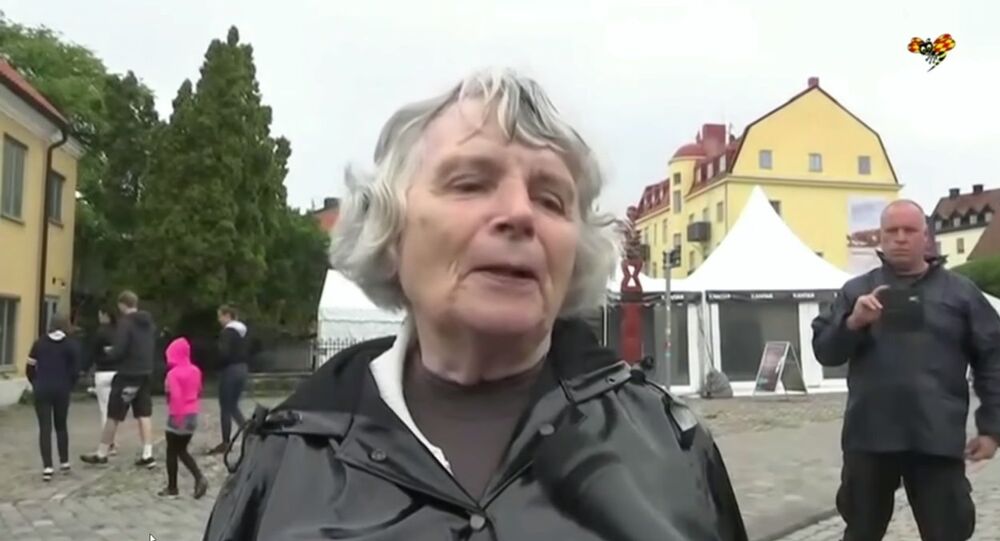 In an ironic twist of fate, the soundness of the judgement against the seasoned neo-Nazi was questioned by a left-wing organization working against right-wing extremism.

The 90-year-old Vera Oredsson, former leader of the now disbanded neo-Nazi Nordic Realm Party (NRP) has been sentenced by the Falun District Court to a SEK 4,000 ($490) fine for inciting hate, Swedish Radio reported.

According to the judgement, Oredsson made a "Hitler salute" in connection with a manifestation by the neo-Nazi Nordic Resistance Movement (NMR) held in Borlänge in May 2016.

Oredsson denied the crime, claiming that she had only waved to the protesters against the NMR demonstration that had flocked around her. The judgement will be appealed.

Johan Nordqvist of the left-wing NGO Juridikfronten ("Legal Front"), which is the driving force in legal action against right-wing extremists, voiced his surprise over the conviction. According to him, the charges were based exclusively on a photograph, and an arm motion looking like a Nazi salute which may in fact have been something else.

"That the gesture itself constitutes hate against a group of people is no surprise, the fact that the photographic evidence was considered sufficient for a conviction is," Johan Nordqvist told Swedish Radio.

The Nordic Realm Party (Nordiska rikspartiet, NRP) was founded in 1956 as the National Socialist Combat League of Sweden by Göran Assar Oredsson. In the 1970s, when Oredsson was busy writing his semi-autobiography "Blessed Be Everything that Has Made Me Harder"), his wife Vera took over as the party leader, becoming the first Swedish woman to ever lead a party. The NRP ran for parliament in 1973, but only managed to obtain a few hundred votes. The party finally dissolved in 2009.

Oredsson, née Schimanski, was born in Berlin to a Swedish mother and a German father, who was a soldier and a member of the Storm Detachment. During her time in Germany, Oredsson was a member of the League of German Girls, the female equivalent of the Hitler Youth movement. She arrived in Sweden in 1945 via White Buses, a rescue operation organized by the Swedish Red Cross and the Danish government.

​In 1973, Oredsson was charged for sporting swastikas alongside her husband, but was later acquitted after claiming that it was not a political symbol, but rather a spiritual one. After the disbandment of her former party, she joined the NMR.

​The Nordic Resistance Movement (Nordiska Motståndsrörelsen, NMR) is a pan-Scandinavian organization (bar Denmark, whose NMR affiliate disbanded in 2016) that unites several hundred members and seeks to establish a single Nordic National Socialist ethno-state. The NMR is a staunch opponent of immigration from "non-white" countries. It relies heavily on traditional Nordic and Viking imagery such as runes. The NMR was banned in Finland in 2017, although the ban has been appealed.