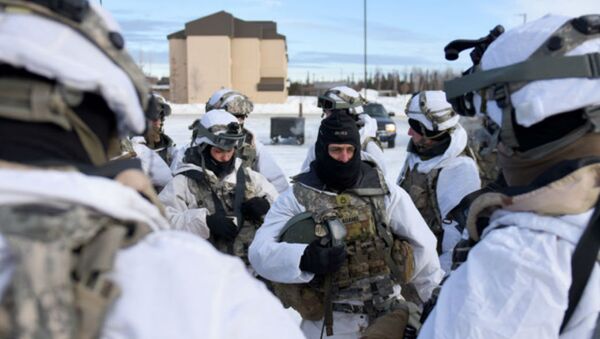 Prior to the visit, UK foreign secretary Jeremy Hunt said to his counterpart Stef Blok that the UK and Netherlands would "work to further peace and security across the globe," including fighting terrorism and cybersecurity to "promoting values of freedom."

The two militaries have worked closely together for over 45 years, "demonstrating world-class military integration," UK defense secretary Gavin Williamson also said prior to the visit.

Dutch General Accuses Russia of Trying to 'Provoke' NATO Marines in Arctic
Williamson mentioned that British and Dutch efforts in Norway to build the Defense Arctic Strategy "shows our deep-shared commitment to European security," adding that the visit would help celebrate "an enduring alliance with one of our closest defence partners".

The visit follows statements from Dutch marine corps director of operations Gen. Jeff Mac Mootry, who accused the Russian military of provoking NATO soldiers in the Arctic Circle, adding that Russian ships wanted "to make their presence visible […] in a provocative way".

Within pending bilateral agreements and joint economic initiatives lies the core of Anglo-Dutch dealings: containment of Russia and militarization of the North Sea under NATO, with the impetus for doing so beginning in October.

Instead of contacting Russian officials, Dutch media leaked the reports six months later, in September and close to an Organization for the Prohibition of Chemical Weapons (OPCW) meeting the following month. Russian diplomats invited the Dutch ambassador to comment, but “we did not receive a sensible answer,” Lavrov told the press.

Lavrov called Dutch accusations “megaphone diplomacy” which neglected established diplomatic channels and instead were used as a platform for rallying the OPCW to “turn its Technical Secretariat into a kind of punitive body”, adding that a North Atlantic Council meeting took place the same day as the news conference. This set the stage for increased Dutch cooperation with NATO.

What Is the UK Defense Arctic Strategy?

A Defence Ministry press release said that changes "in the natural environment in the Arctic and High North" were driving Russia to "an increase in military activity" while accusing Moscow of building over 100 military facilities and surreptitious submarine patrols.

The strategy was announced September 30 and entails sending Royal Marines to "cold weather training" exercises each year in Norway "on a long-term basis", with roughly 800 marines set to deploy in 2019 as an integral part of Norway's defense plans, among other initiatives.

Like Mac Mootry, Britain's defense secretary urged MPs to "wake up" to the "Russian threat", pointing to alleged submarine activity in the North Atlantic which undoubtably "shows the increasing aggression and increasing assertiveness of Russia".

Organizations such as the World Policy Institute and other Western news sources published several journals touting this hypothesis in 2015, but the RAND Corporation, America's military think tank, published a 2017 report at the height of "Russian meddling" accusations acknowledging that global Arctic cooperation had "remained largely intact" despite tensions.

The document segued into mapping potential, not present threats to Arctic security, in addition to recommending the US government ways to mitigate "risks to [Arctic] cooperation".

The report warned the Pentagon that Russia would firstly perceive NATO expansion as a threat to national safety, including "heavier NATO involvement [through] increased military presence". It also added that NATO should maintain such a presence because "five of its member states are Arctic nations" despite Russia protesting the alliance's military buildup on its doorstep.

World
UK Unveils Strategy to Defend Arctic in Light of Alleged Russian Threat
The report also warned that if Sweden and Finland joined NATO, Russia would accuse NATO of encirclement and endangering Moscow's Arctic resources which could disrupt "its ambitions for enhancing its energy sector through northern oil and gas reserves".

Stepping up military coordination in the High North and Arctic regions is a symptom of NATO expansion and not Russian belligerence by the RAND Corporation's own accord. Pulling the Netherlands into NATO's Arctic military objectives will court disaster over the coming years and will not guarantee safety for any participating countries.