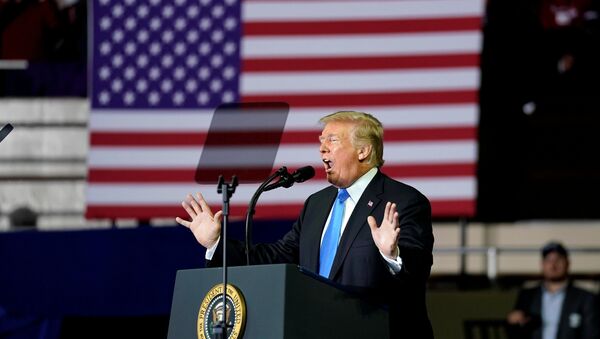 © REUTERS / Joshua Roberts
Subscribe
International
India
Africa
US President Donald Trump’s approval rating prior to the November 2018 midterm elections exceeds the rating for President Barack Obama ahead 2010 midterms by 2 percent according to a new poll.

Obama’s rating saw its lowest point ahead of 2010 midterm elections in October 2010, after which the Democratic party lost a significant number of seats both in the House and the Senate.

Both Republicans and Democrats view the midterms as a referendum on the current president and his two-year leadership. Vulnerable Democratic Senators are seeking to win back seats that Trump won by double digits in 2016, even as Republicans deal with widespread disapproval of the president among suburban women and other groups.

GOP Candidates Reportedly Assaulted Ahead of Looming Midterm Elections
The poll showed that eligible Americans are more eager to vote than they have been for years, the Hill reported. A reported 72 percent of Democrats responding to the poll agreed that they are very interested in the upcoming election, even as 68 percent of Republicans said the same.

“Midterms are about mobilization, and we are headed into the stretch run with unprecedented enthusiasm among both parties,” Democratic pollster Fred Yang told NBC.

Earlier this week during a campaign tour for a Republican party candidate, Trump claimed that the upcoming midterm elections will be a referendum on “Kavanaugh, the caravan, law and order and common sense,” referring to a variety of hot-button issues raised in the recent months.

The poll also revealed that with just two weeks to go before the elections, Democrats command a 9-point lead over Republicans in the battle for congressional control. Around 50 percent of likely voters asked by the poll said they want the Democrats to take over, while only 41 percent said that they want Republicans to retain the majority.