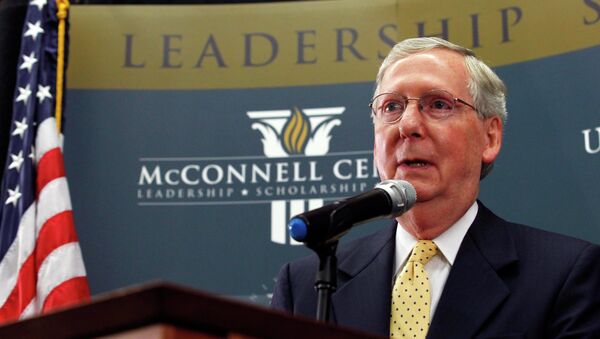 Customers at a diner suggested “leave [Mitch McConnell] alone” after an angry protester attempted to coerce the Senate Majority Leader and his wife into leaving.

A video filmed by a customer shows a person approaching the Senator and his wife — US Transportation Secretary Elaine Chao – and interrupting their personal dialogue in a small diner in Louisville, KY, TMZ reported.

“Oh yeah, why don’t you get out of here? Why don’t you leave our entire country,” the angry man told the couple.

After Chao attempted to argue with the man, McConnell simply ignored him. Meanwhile, other customers began shoo-ing gestures and told the yelling man to leave the couple alone.

The woman who recorded the incident told TMZ that the angry man hit McConnell’s table with his fists and threw food, after accusing McConnell of planning to “come for Social Security,” cited by The Hill.

TMZ noted three other people in the diner expressing their anger toward the Republican Senate Majority Leader, but the media outlet did not define what action they took. Following the incident, McConnell reportedly thanked supporters and shook hands.

McConnell spokesman David Popp stated that the couple “appreciates those who spoke up against incivility,” adding that, “They hope other patrons weren't too inconvenienced by left-wing tantrums. As the Leader often says, the Senate will not be intimidated by the antics of far-left protestors.”

This is not the first time that Republicans or members of the Trump administration have been verbally abused or forced out from a restaurant. Last month, Texas Republican Senator Ted Cruz was forced out of a restaurant by US citizens angry with his support for the controversial confirmation of US Supreme Court Judge Brett Kavanaugh. McConnell and Chao were confronted by protesters earlier in 2018 as they left an event at Georgetown University in Washington DC. Chao told the protesters to “leave my husband alone,” cited by Politico.