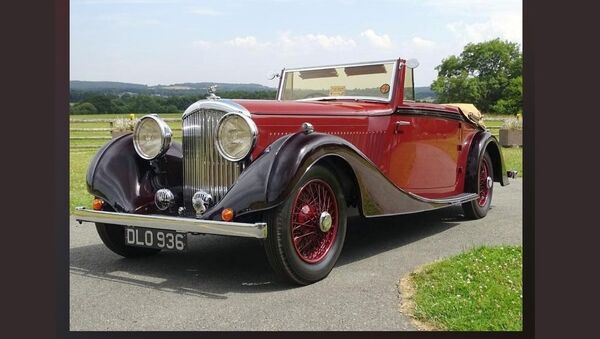 Dozens of vintage cars have gone on sale at the Imperial War Museum in Duxford, England on Wednesday. The H&H Classics auction house rolled out dozens of automobiles, some as old as 1936.

With distinguishing features, such as a longer bonnet, a cowled radiator and a downswept tail incorporating an enclosed spare wheel, the 1936 Austin Seven Ruby is estimated to sell for over $6,500 (£5,000). The Seven remained in production from 1922 until 1939 but not a lot of them were preserved until today. According to the auction house, the "remaining cars are therefore an increasingly vital element of the vintage movement."

Another rarity included in the auction is a 1929 Bentley owned by a British financier and racing driver of the 1920s, Woolf Barnato. Barnato achieved three victories in the 24 hours of Le Mans, the world's oldest active sports car race in endurance racing.

Soon after it was registered, the Bentley caught the attention of Boston, Massachusetts-born academic W. Randolph Angell Esq. Recalling, who described it as:

"How does one cope with blind passion? I was a ruined man. A visit to the showroom for a closer look was devastating. The car was immaculate, perfect, with tonneau covers and spares etc which had never been used. The asking price was beyond my means and in any case I had no driving licence or any sensible place to keep the car even if I were able to acquire it."

The academic eventually found the money and purchased the car.

H&H was founded by Simon Hope and Mark Hamilton in 1993 as a specialist auction house dedicated solely to the sale of collectors' motorcars and motorcycles.