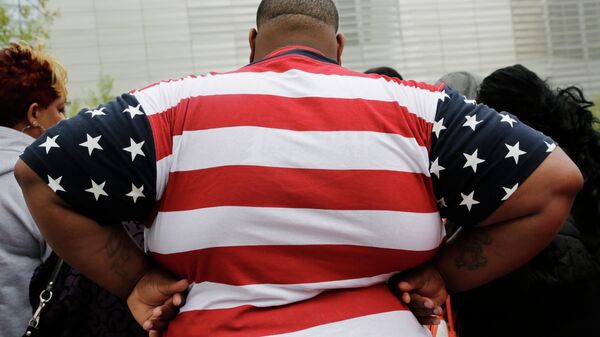 The year 2018 is the first year since 2005 that the US military could not fulfill its recruitment quota.

As American media consistently accuse Russia and China as being the biggest threats to the US, it turns out the US army is struggling with a much more mundane threat right on its own doorstep: low eligibility numbers brought about by poor health and rampant obesity.

A study published earlier this week by the Council for a Strong America revealed that a whopping 71 percent of young people between 17-24 are unfit for military service because of medical reasons, with obesity disqualifying 31 percent of potential recruits.

"Obesity has long threatened our nation's health. As the epidemic grows, obesity is posing a threat to our nation's security as well," states the new report, cited by MedicalXpress.com.

Greek Island Bans Overweight Tourists from Riding Donkeys Amid Public Outcry
Last month, the US Army announced that would not meet its recruitment goal of 76,500, being short of some 6,500 soldiers, according to the Inquirer. This is the first shortfall since 2005, and the shift is likely to continue, according to the study.

"Given the high percentage of American youth who are too overweight to serve, recruiting challenges will continue unless measures are taken to encourage a healthy lifestyle beginning at a young age," states the study, entitled "Unhealthy and Unprepared."

Other reasons for disqualification are prior use drugs or lack of required academic qualifications.

"I saw it myself: pudgy soldiers visibly pushing, or beyond, the ‘height and weight' standards," retired Army Major General Jeffrey Phillips wrote in a Military Times commentary.

According to Phillips, the military spends over $1.5 billion every year treating obesity-related health conditions, as well as on filling positions vacated by unfit troops. Besides that significant expenditure, US Army bases are equipped with top-notch gyms.

'Fat or Pregnant:' European Broadcaster Cuts New Show Following Uproar
The Council for a Strong America report, however, concludes that a solution lies in a nationwide program for parents to ensure that their children learn about the vital importance of physical activity from a young age.

The United States leads the world in obesity, with the overweight rate in 2017 at 38.4 percent, according to a report by the Paris-based Organisation of Economic Co-operation and Development.