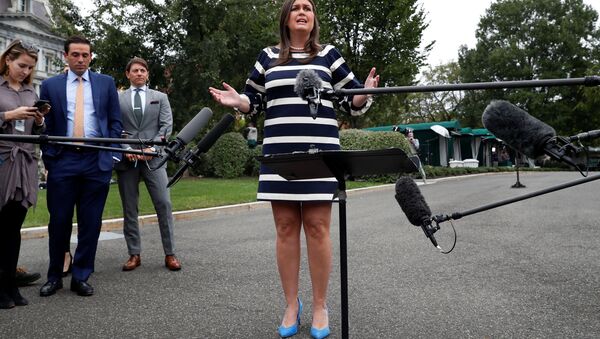 The US watchdog organization Citizens for Responsibility and Ethics in Washington (CREW) on Friday filed another complaint with the Office of Special Counsel (OSC) — the federal employee protection agency — against current White House Press Secretary Sarah Huckabee Sanders, accusing her of violating the federal Hatch Act, according to The Hill.

The 1939 Hatch Act, formally known as An Act to Prevent Pernicious Political Activities, is designed to prevent workers employed by the executive branch of the federal government from using their position to promote certain forms of political activity.

Sanders is accused by CREW of promoting a political agenda by tweeting a photo of herself with rapper Kanye West following the latter's promotional appearance with US President Donald Trump on Thursday in which the rapper is prominently wearing Trump-branded political campaign garb.

The Hatch Act specifically prevents federal employees from using their position, resources, access and social media accounts for any politically-related purpose. In the event of a violation an employee can be fines up to $1000, potentially facing disciplinary actions or even termination

In its allegations, CREW specified to the OSC that Sanders' tweet clearly violates a March clarification by the federal employment agency stipulating that all ‘MAGA' references would be a violation, as reported by The Hill.

Sanders and other Trump administration employees and appointees have consistently violated the terms of the Hatch Act, according to The Hill.

An August complaint to the OSC filed by CREW against ten White House employees, including Sanders, noted that the staffers were openly displaying the Trump-branded MAGA — an acronym for ‘Make America Great Again' — slogan.

"This administration does not seem to care about what the law says when it comes to ethics issues like using official positions for politics," observed Noah Bookbinder, the CREW executive director, cited by The Hill.

"How many investigations and findings of violations are needed until this administration takes action to stop the misuse of government resources for political activity?" Bookbinder added.

Stephanie Grisham, the spokeswoman for US first lady Melania Trump, has been accused by CREW of Hatch Act violations in displaying #MAGA as part of her personal Twitter account.

Outgoing US Ambassador to the United Nations, Nikki Haley, has been accused of the proscribed practice after retweeting an endorsement from the president in October 2017.

In response to the CREW filings, the OSC reportedly issued warnings to Scavino, Haley and Grisham, according to The Hill.

A March OSC investigation noted that Trump advisor Kellyanne Conway was in violation of the the Hatch Act in two instances, including using her position to advertise Ivanka Trump-branded products.