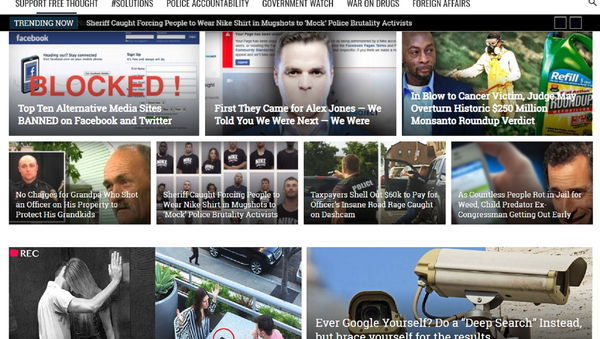 Independent media outlets in the US are reeling after Facebook shut down some of the most popular pages Americans go to for alternative sources of information. Radio Sputnik’s Loud & Clear spoke to one of the people at the center of the story.

Facebook's ban on Thursday of more than 800 pages and accounts is likely the most sweeping act of political censorship in modern American history. While the targeted pages spanned the political spectrum, mainstream media has honed in on the conspiratorial, right-wing pages for dissection, hanging hugely popular groups like The Free Thought Project, the Anti-Media, Counter-Current News, Cop Block and Policing the Police out to dry.

"Facebook said we violated their terms, which is the standard operating procedure for when they ban you. You know their terms are listed on their website, and it's very long, and anybody could fit under the numerous violations that they claim against you, so we don't know what terms exactly we violated," Matt Savoy of The Free Thought Project told Loud & Clear hosts Brian Becker and John Kiriakou.

The groups would often promote each other's work in an effort to build up the collective voice of independent media, and the people behind the pages have sunk years of work and even their own cash into making their projects viable alternatives to the corporate media.

Savoy said that The Free Thought Project and others were banned because "we had multiple pages, and they [Facebook] are trying to purge independent media right before the election cycle so we don't put information out there they don't want."

Savoy said that between the pages operated in his network, "We had roughly 6 million followers," including the largest police accountability page on Facebook.

Savoy disputes that, noting that the bans came down just weeks before the midterm elections in the US, and pages like The Free Thought Project were anything but non-political.

"When there's millions of people all researching topics and putting it out there and coming together as a community, that's far more powerful than, you know, one talking head on a cable TV channel just spouting the day's rhetoric that was handed to them from some government source," Savoy said.

The ban was just the last point in a line of aggressive measures to stem the flow of information from the pages, between unfavorable treatment from the news feed algorithm to hiring fact checkers to provide disclaimers about supposedly fake news. Savoy said that after some of Facebook's fact checkers labeled their posts misleading, his group sent cease and desist letters to the organizations — most of which retracted their judgments. The label was "egregious — they weren't actually fake news," Savoy said.

"Within the last two years after this ‘fake news' narrative came out in 2016 after the election cycle, they kind of — and by they I mean the establishment media — swallowed the power I believe that independent media had," he added.

"I believe that we became a threat to the establishment, and so they put their sights on us," Savoy said.

Independent reporter Ford Fischer, founder of the video-based news startup News2Share, had some of his livestreams temporarily removed from Facebook during the purge and later joined the show. Sputnik News has previously reported on Facebook's censorship of Fischer's videos.

"A lot of journalists whom I would consider myself an ally with — people whom I know in real life, so these are not people who could potentially be just someone in the Philippines typing fake news at a desk for five cents an hour — these are real people, not just click farms, working for a variety of different news outlets," Fischer told Loud & Clear.