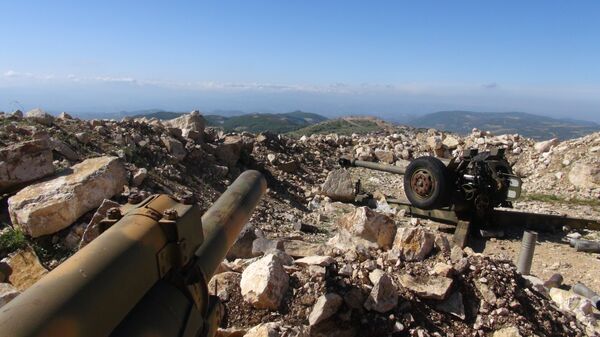 Nusra* terrorists in the region are continuing to launch missile and bomb attacks on civilian settlements and Syrian Army positions, prompting the military to return fire along the entire border with neighboring Idlib province, a Syrian Army officer told a Sputnik Arabic correspondent.

According to the officer, Nusra regularly attacks infrastructure and residential areas, with the militants recently using a Grad rocket launcher to attack the Latakia-Aleppo Highway. No one was killed or injured in that attack, but infrastructure was damaged, the officer said.

Russia's S-300 Systems 'Enough' to Respond to Israel's Threat - Syrian FM
Syrian forces have responded to the shelling by striking the militants from near Kabani, a village which sits on a strategic height overlooking the Al-Ghab Plains.

The vast majority of Latakia province has been liberated from the militants over the last four years. The region's northeastern-most territories, bordering on Turkey and the militant-controlled province of Idlib, remain under terrorist control.

The Russian Center for Reconciliation of the Opposing Parties has reported repeated ceasefire violations by militants in Latakia province in recent days, with one civilian wounded in the settlement of Sandran, and shelling attacks also targeting the villages of Beit Smaira, Sandran, Shir al-Sabah, Bashira, Rueyset Iskander, Safsafa, Ikko and Tell al-Tut last week, according to a spokesman.

WATCH Syrian Army Deploy Artillery in Latakia to Wipe Out Terrorist Rocket Sites
Ceasefire violations have also been reported in neighboring Idlib province, where Russia and Turkey have agreed on the creation of a demilitarized zone along the line of contact by October 15. Idlib remains the last major stronghold of Islamist militants and other armed opposition formations in Syria. Last month, the United States and its allies warned Damascus not to attack the province, saying they would consider a military response if evidence of the use of chemical weapons was found. Damascus and Moscow later revealed intelligence information that militants may stage a false flag chemical attack to prompt a Western intervention.

*Nusra Front, aka Jabhat Fatah al-Sham, aka al-Qaeda in Syria, a terrorist group outlawed in Russia and many other countries.